The Grandparents Who Protest: the "Iaioflautas" 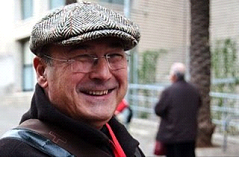 An inspiring group of older individuals who are proving the point that legitimate social protest in this country is not just limited to youth movements.


“They call themselves “the children” of 15M despite the fact that the majority of them far exceed the age of 60, they are retired, they are “iaios” (grandparents, in Catalan) and they are veterans of long-term activism.

Celestino Sánchez [pictured above], Antonia Jover, Adrián Rísquez, and Rosario Cunillera are some of the members of the the “Iaioflautas,” a collective that emerged in Barcelona last October alongside the camping grounds in Plaza Catalunya. Its objective is to support the youth in their own way. But the fight, they assert, is the same: “for a dignified democracy by name and social justice against conspiratorial bankers and politicians.”

The “iaioflautas,” whose name was invented in solidarity with the “perroflautas” (gutter punks) — a derrogatory term with which the president of Madrid used to refer to the young occupiers — combine some of the methods they used in the anti-Franco, labor union, local or leftist fights with their learning about new technologies.

To summarize, they organize a “direct action” in the street once a month, almost in secret, and do not announce it on their Twitter account, @iaioflautas, or blog until it has already begun. That way, they avoid problems with the police.

The first event took place in November, when they occupied a Santander Bank office in Barcelona. The most recent one, called “Operation #RebelionBus,” occurred on Wednesday, February 1. Some 70 “yayos” (grandparents) arranged to meet in the very center of the Catalan capital and “hijacked” a bus in protest of the abusive increase in public transportation fares.”