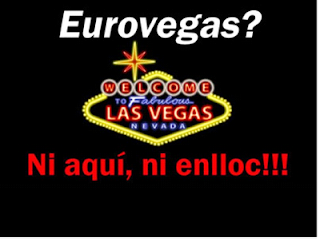 Catalan President Artur Mas has said it will make this country “a leader of tourism in Europe” but the so-called Eurovegas casino project is meeting with plenty of objection from residents in the Viladecans and Gavà area around Barcelona’s El Prat airport.

In fact, the governments of both Madrid and here in Catalunya are competing for the patronage of North American business magnate Sheldon Adelson who has schemes for a 12 hotel, 36,000 bed site complete with 6 megacasinos and 3 golf courses.

Free land and exemptions from legal restrictions are said to be part of the deals being offered to Mr Adelson.

Protected birds and fauna in the coastal marshland area next to the aurport are believed to be under threat and an on-line petion against this and the other disadvantages of the proposals is being launched.
Posted by Brett Hetherington at 2:06 PM

A few years ago there was talk in the UK of 'super-casinos'-- Blackpool and Manchester amongst the posible locations if I remember correctly. Thankfully nothing came of it.

The protesters in Catalonia should take heart from this-- this is one situation where enough protest will actually work.

I hope your right about that but there is a lot of desperation here and a government that is rabidly pro-business. People are organising against this monstrosity so time will tell...

Hope Madrid gets it, insteah of Barcelona. Being to Barcelona a few times lately and their not very open to foregners or spanish speakers of other parts of spain. What most catalonians want is independence from the rest of the country and if you don't speak catalonian you are treated as a second class citizen there. Madrid is a bigger city, more diverse/ international, in the center of the country, link to the rest with high speed rail lines and spain's biggest airport (Barajas).

Thanks for the comment, Anonymous. I have to say that, as someone who lives near Barcelona, I hope Madrid gets this “megacasino” megasite too [if anyone has to get it.] What you say about Barcelona has some truth to it, in my opinion. There are some close-minded opinions here but I wouldn’t go as far as saying that is the dominant mentality in the city, which is quite accepting of foreigners…if not necessarily embracing of us. A language divide does exist though, as you say. Again though, I don’t think it is quite as grim as you argue. There are plenty of language zealots and those who are for independence in any form. I’m not convinced this is a majority, in Barcelona at least. But the economic crisis is certainly fueling this movement. I get the sense that most people here accept that Castellano is a good second or third language to have. In my view, Catalan has a clear right to exist as a language and a culture but not at the expense of a plural, diverse and genuinely inclusive society.