[A poem by Ted Hughes, which I dedicate to my twin-brother Matt (a poet) who is currently visiting us here and loving it.]

Spain frightened you.
Spain.
Where I felt at home.
The blood-raw light,
The oiled anchovy faces, the African
Black edges to everything, frightened you.
Your schooling had somehow neglected Spain.
The wrought-iron grille, death and the Arab drum.
You did not know the language, your soul was empty
Of the signs, and the welding light
Made your blood shrivel.
Bosch Held out a spidery hand and you took it
Timidly, a bobby-sox American.
You saw right down to the Goya funeral grin
And recognized it, and recoiled
As your poems winced into chill, as your panic
Clutched back towards college America.
So we sat as tourists at the bullfight
Watching bewildered bulls awkwardly butchered,
Seeing the grey-faced matador, at the barrier
Just below us, straightening his bent sword
And vomiting with fear. And the horn
That hid itself inside the blowfly belly
Of the toppled picador punctured
What was waiting for you. Spain
Was the land of your dreams: the dust-red cadaver
You dared not wake with, the puckering amputations
No literature course had glamorized.
The juju land behind your African lips.
Spain was what you tried to wake up from
And could not. I see you, in moonlight,
Walking the empty wharf at Alicante
Like a soul waiting for the ferry,
A new soul, still not understanding,
Thinking it is still your honeymoon
In the happy world, with your whole life waiting,
Happy, and all your poems still to be found.

(Source and commentary here.)
Posted by Brett Hetherington at 12:43 PM No comments:

[This article of mine was first published in Catalonia Today, 20 November 2008. I decided to republish it here because of a similar case with a friend of my 12 year-old son.]


A recent survey in England found that teenagers’ favourite activity during school lunchtimes was not playing a sport or even talking with friends, but sending text messages on their mobile phones.
Young people in Catalonia are no less vulnerable to the attraction of mobile phones.
Vega González Bueso,a psychologist and assistant medical director at Barcelona's Atenció i Investigació en Socioaddiccions (AIS), (or Organisation for the Research and Treatment of Social Addictions) says that AIS is dealing with a growing number of cases related to this behavioural compulsion.
“The first patient with a mobile phone addiction was treated at AIS in 2003,” she says.

“The trouble is that mobile addiction is socially accepted and this makes it more difficult to detect the problem.
Generally, requests for treatment come from a relative who has, for example seen a very high telephone bill, and they then force the person in question into starting treatment.”

While high phone bills are a problem, mobile phone addiction can take a psychological toll, leading to isolation from the user’s social environment.
Ironically, a piece of technology that is supposed to make us more closely connected can instead create mistrust or feelings of separation between an addict and friends.
In one case described by Vega González, 18-year-old Susanna began to use her phone more and more, to the point where she became unable to suppress an impulse to send messages and talk at all hours.
She began failing all her subjects in school and her mobile bill climbed to €800 a month.
“Susanna sold some family jewellery to earn money to top-up the credit on her mobile,” Vega González said.

”She even communicated with people she did not know and ended up losing lots of friends because she was relating less and less to her environment.”

Vega González said the high bills tipped off her family,prompting them to seek help.

After a year of therapy, Susanna is better, but “went through terrible moments when at the beginning she was forbidden to use the cell phone,” she said.

Treatment at AIS includes the family or partner, whose involvement is seen as an important in solving the problem.

One aim is to train the affected person to develop greater social skills so they can relate to people more without the use of a mobile phone.

Infatuation with mobiles is found more among males than females, according to AIS, but those at risk of addiction tend to share similar problems of low self-esteem, communication difficulties, insecurity and emotional instability.

Vega González says an inability to control phone use despite knowing the negative consequences of the behaviour is usually a clear sign of a significant problem.

”If they stop doing important activities such as study or work because of this addictive behaviour or have continuous thoughts about their phone when he or she does not have access to it, this is the time to seek treatment,” she said.

Posted by Brett Hetherington at 1:35 PM No comments: 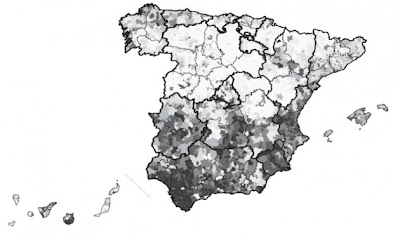 There are not many better ways to show the crude inequality of a country than in a mortality atlas: a map that shows at a glance where and how people die.

The most complete atlas of mortality to date in Spain is heartbreaking. Data and 200 maps showing the mortality of men and women between 1984 and 2004 show that in southern Spain premature death from all causes and for both sexes is higher than in the north.

The atlas, made by 25 researchers led by Joan Benach and Jose Miguel Martinez, professors at the University Pompeu Fabra, reveals that in the case of men, higher mortality is concentrated in the southwest, with cancer of the trachea, bladder disease and lung cancer as most common.

"The atlas does not explain the causes of mortality," says Joan Benach. The maps, however, do point to where the problems to investigate are, as when an earlier work showed an increased risk of dying from several types of cancer in coal mining towns [including those in Asturias where I recently visited to learn and write about.]

[My translation from source in Castellano here.]
Posted by Brett Hetherington at 8:34 AM No comments:


Goodbye Barcelona is a new musical about a British mother and child who both get caught up in the Spanish Civil War. It is inspired by the lives of men and women around the world who joined the International Brigades to fight fascism.

Now, after two years [ruuning in London] the Teatre del Raval in Barcelona has offered to mount a brand new production of the musical in Catalan. But in order to initiate this production, with a new cast, band, creative and technical team, they need your support.

The Catalan production of "Goodbye Barcelona" needs 6,000 euros to balance the budget, which they are requesting through Verkami, and which will be used to pay the team.

Posted by Brett Hetherington at 1:18 PM No comments:

When your walk really says who you are...

“Ramón Mollineda and his team at Universitat Jaume I in Castellón de la Plana, Valencia are developing a system that uses key aspects of a person's walk to build unique identification data.

It works by collecting a series of silhouettes provided by video [images] and placing them on top of each other to create a summary image or "gait signature." Together with physical appearance, the final representation can be used to help identify the individual.”

Read more here.
Posted by Brett Hetherington at 9:18 AM No comments: