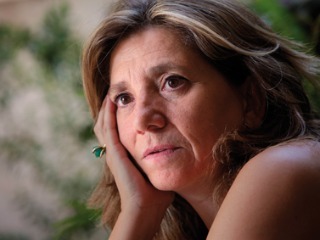 "‘L'endemà. Respostes per a decidir‘, a documentary about Catalonia's potential independence from Spain, produced by Isona Passola [pictured left], earned a record-breaking €150,000 on the crowdfunding platform Verkami on February 15, 2013.


Passola, who produced the award-winning [and extremely moving] film Pa Negre, hoped to reach that amount in 40 days, but [did so in just 11 days.]

Previously, the crowdfunding record in Catalonia was €,50,000, according to the Catalan-language journal Diari Ara.

The project's promoters have eagerly asserted that if they can reach €153,108  the film will be “the most successful crowdfunding project in Europe.”

L'endemà is intended to project “clear, solid, reliable and credible arguments” to combat “the fear of voting YES” in an upcoming referendum for the independence that the Catalan government is organizing, while defying firm resistance from the central Spanish government."

Posted by Brett Hetherington at 7:51 AM No comments:

Corruption - or just "the way we do things here"? 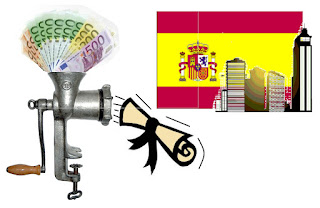 There are a a couple of things that can be said about this latest reeking, venal scandal in Catalonia.*

The man at the heart of it,  Jordi Pujol is a hero to many people here as he largely seen as the main person responsible for Catalonia's post-Franco autonomous powers.

His son has allegedly been laundering his family's allegedly dirty money from an alleged trunk of an alleged car to an also-alleged bank in Andorra (which is a vile, ultra-consumerist ski-resort city in a tiny principality where people like to drive their big black cars too fast through narrow roads.)

This part of the world (still) has a lot going for it but institutional honesty is obviously not one of the strong points.

Cheating on your income tax and using the "black" or cash-economy is largely the done thing. In my experience, cheating, in whatever form, is thought to be the clever thing to do.

Children do it from a very young age and at a local (wealthy) private school where I used to work, it was completely standard to cheat in tests and teachers knew about it and did not punish it.

The family is probably the most important single unit in Mediterranean Europe, so favouring a brother, son or cousin is entirely normal.

It is not just those at the top of the political pyramid who do this. It is a practise that is as ordinary as drinking a glass of wine here. Having connections is called "enchufe" - literally, 'plugged-in.

It is difficult living here without some kinds of connections to help you advance your lot, so the common-place act is the one that scratches a friends back when they will also soon scratch yours.

The latest cases of corruption are logical but extreme, grotesque extensions of some basic dishonesty.

An edited version of the above text was first published under the same title at the World Voices blog.

[*I strongly suggest reading one of the comments from 'reload' under the original article for an insightful explanation about the surprising use of 500 Euro notes.]
Posted by Brett Hetherington at 5:05 AM 2 comments: 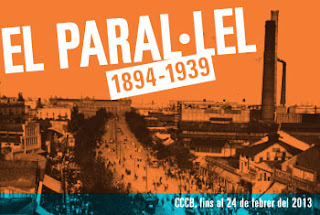 I recently visited Barcelona's CCCB to see their Paral·lel [Avenue], 1894-1939 exhibition and came away with two names stuck in my mind.

I was taken with the soulful paintings of Catalan artist Isidro Nonell and by the sensuality of the actress/performer Raquell Meller, who (oddly) has a great attractivness on film but hardly any in the frozen image.

The transformation of this area from a dusty and sleezy shantytown of “outsiders” into an entertainment district then into an important boulevarde is remarkable.

“Avinguda Paral·lel was the centre of nightlife and bohemia in the Barcelona of the early 20th-century and was the realm of the so-called “lesser genres”, shows definitely popular in nature and in which music usually played a vital role. These included from cabaret and music hall, to the revue, vaudeville and social melodrama, flamenco and zarzuela, the traditional Spanish operetta. In addition, there was a range of paratheatrical arts, such as circus and varieties of all kinds, often combined with the first cinematographic screenings.”

Posted by Brett Hetherington at 11:36 AM No comments:

Time. It is the one thing that many of us feel like we don’t have enough of. Generally, we move through our lives at a rapid pace with mobile phones permanently on and our attention fixed on work and earning a living.

But in Catalonia, just as in other parts of the planet, there is an increasing number of people who are trying to reject a hectic ultra-modern lifestyle. They want to experience things in an unhurried way and the international Slow Movement is now helping that to happen.

Inspired by Italian Carlo Petrini’s Slow Food Foundation, which quickly spread world-wide, a number of other Slow movements have begun to emerge, especially across Europe. These now include Slow Science, Slow Design, Slow Money, Slow Travel, Slow Cinema (in this country with, Eduard Punset Casals, the Barcelona-born economist, lawyer and science writer/commentator) and even a Slow Parenting book by Helle Heckman, to add to Carl Honoré’s greatly influential title, “In Praise of Slow.”

On top of all this, we have Slow Towns (CittaSlow, in Italian) which in Catalonia is the two Empordà Baix villages of Begur and Pals on the Costa Brava. (The Spanish Slow Towns are Bigastro, Lekeittio, Mungia and Rubielos de Mora.)

But what exactly is a Slow Town?
According to the official website “There are currently 147 Cittaslow towns in 24 countries across the world making Cittaslow an internationally recognised standard [of] accreditation that acknowledges the dedication and commitment of community members who work hard to make their part of the world a healthier, greener, happier, slower place to inhabit.”

The mayors of each town are representatives on the international organization of CittaSlow and they are charged with the responsibility of co-ordinating the preservation of their regions’ “distinct identities in the face of global homogenisation.”

Only a town with less than 50,000 residents can apply for formal recognition and CittaSlow states that those who are accepted “are not state capitals or the seat of regional governments, but are strong communities that have made the choice to improve the quality of life for their inhabitants.”

To achieve the status of “Slow Town,” the town council must agree to accept the guidelines of Slow Food and work to “improve conviviality and conserve the local environment.” It first has to pay 600.00 euros to the Cittaslow central office.

Apart from the continuing promotion of Slow Food restaurants and suppliers, some programs already implemented in Slow Towns include recycling projects, after-school programs, and the provision of information for tourists that helps them have a genuine “local’s” experience. For general public use in festivals for example, town councils can also buy Cittaslow biodegradable pulp plates and cutlery made from cellulose, while in their offices using approved recycled paper notepads.

In Catalonia the Slow Food branch in Lleida is particularly active and the Facebook group of the “Slow Movement Catalunya” has in excess of 150 members. They say that they are a social movement that: “defends a slower life, without pressure and eating calmly with friends [in addition to] advocating working at a reasonable pace and not more hours than is necessary, gazing at the sea, playing with children, conscientious thinking and going out for a tranquil walk.”

Last year Carlo Petrini, the founder and President of Slow Food International spoke at the United Nations Permanent Forum on Indigenous Issues. As the first ever outside speaker to be invited to address the floor in the this forum's ten-year history he gave Slow Food's perspective during a session on the right to food and food sovereignty.

How long might it be before a Catalan from one of the many Slow movements does the same?

An edited version of the text above was first published in Catalonia Today magazine in February, 2013.
Posted by Brett Hetherington at 6:41 AM No comments:

Barcelona and "The Human Brain Project"

Funded by the European Comission, the project is set to:

“provide new insights into the basic causes of neurological diseases such as autism, depression, Parkinson's, and Alzheimer's,...[and] give us new ways of testing drugs and understanding the way they work.

It will also provide a test platform for new drugs that directly target the causes of disease and that have fewer side effects than current treatments...[and] allow us to design prosthetic devices to help people with disabilities.”
Posted by Brett Hetherington at 9:07 AM No comments: