"What can Spain do to tackle its growing suicide problem?"

"Suicides have hit a record high for a third year running, and are Spain’s main cause of unnatural death...

Experts call for a national strategy to curb the rising number of people taking their own lives."

Read more from source at El Pais in English.
Posted by Brett Hetherington at 1:26 AM No comments: Links to this post

"4 maps that [might] change how you see migration in Europe" 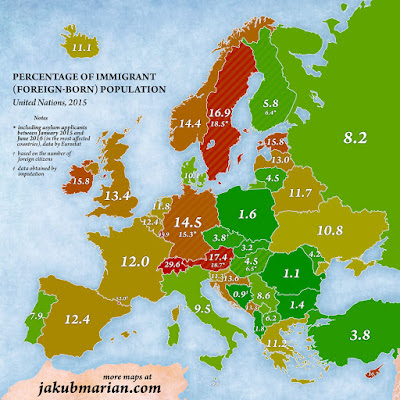 "Did you know that Polish people represent the highest percentage of the foreign-born population in Norway?

Or that the largest proportion of immigrants to the Republic of Ireland hail from the UK?

These four maps, created by Jakub Marian, a Czech linguist, mathematician and artist, are based on a 2015 study by the United Nations on international migration.

1. The percentage of the population of each country that is made up of foreign-born migrants

2. The most common country of origin for that number

3. Whether that number has gone up or down in the past five years

4. The immigrant populations that are expanding the most."

Read more from source here.
Posted by Brett Hetherington at 12:45 AM No comments: Links to this post 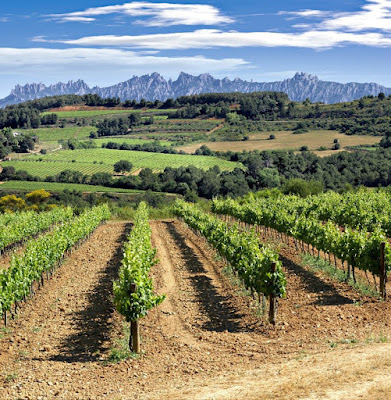 People trust each other where I live.

I'm not talking about the kind of confidence where no one needs to lock their doors. I mean that where I live you don't see that look of suspicion in the eyes of a stranger that you consistently do in England, for example.

There seems to be a basic belief that the men and women next to you are not out to cheat you or somehow do you wrong.

And this is despite acts of terrorism, theft and selfish outlooks on daily display, in addition to a mainstream media that feeds on reporting crime.

Of course this unstated faith is regularly abused. Maybe routinely so. Yet it continues.

We used to live on the outskirts of Vilafranca del Penedès, a medium sized town of about 40,000 people in the agricultural interior of Catalonia. Behind our apartment building there are large grapevine plantations and paths running through them. Every day people walk there, jog, or take their dogs for exercise.

But there are no fences. It would be easy and cheap to put fences around these fields but nobody has felt this to be necessary. Thousands of euros of vineyards lie apparently unattended for short periods of time and these vines are of course unguarded.

If this was in, say Israel or near an English town would it be the same? My guess is no.

There are also no fences in the little village we have chosen to live in since moving a handful of kilometres away from Vilafranca. The grape is still the dominant feature in the landscape and our house looks onto fields of vines: verdant green in summer and bare brown after October.

I find it impossible to walk through these fields with their soothing geometrical lines and not feel better than I did before.

Maybe this is partly why the farmers I talk to seem to be a contented bunch. Despite absurdly low prices for their quality produce it's apparent that they enjoy what they do. I know several who voluntarily work into a very ripe old age, tending to the simplicity of cultivating plants in what the French call an industry of pleasure. Give a man a job that is he is satisfied with and he is halfway to being happy.

Recently though, the basic confidence that the average European has in those around him or her is sadly being tested and is also being shaken.

Terrorism by fanatics, extremists and the ultra-marginalised is mainly responsible for this but so far Spain and Catalonia have resisted seeing right wing political parties as a possible answer to the various forms of random slaughter that have continued across the continent (and for that matter, much of the world.)

I suspect however, that all those healthy fields of green and red grapes will stay unaffected and untouched by the sadistic joy of small-minded egotists intent on mass-murder.

(This article was first published in Catalonia Today magazine, September 2016.)

Posted by Brett Hetherington at 11:43 PM No comments: Links to this post


"There are many preconceived ideas about the lives of the homeless in France. The most widespread amongst them are as follows:
The total number of homeless people in France (excluding refugees in the camps in Calais) is difficult to estimate, but the FNARS, a national organisation for social inclusion and re-insertion, estimates the figure to be between 150,000 and 240,000 people. The Fondation Abbé Pierre, a homeless charity based on the benevolence of its namesake, a 20th century Catholic priest, estimates that there are 50% more homeless people in France than three years ago — including 30,000 children.
A study shows that only 6% of homeless people choose to live on the streets.
Many homeless people are employed on fixed-term or temporary contracts.

In an attempt to correct the narrative about the homeless, some homeless people in France over the years have told their stories in their own words on social media. Let's meet three of them: Stéphane, Francis and ‘SDF75′, who all have at one point offered insight into their lives on their respective blogs.


‘I am a computer programmer first and a homeless person second’


SDF75 explained why he wanted to create a different blog:

Posted by Brett Hetherington at 8:59 AM No comments: Links to this post