Spanish artist on trial over 1978 "How to Cook Christ" video 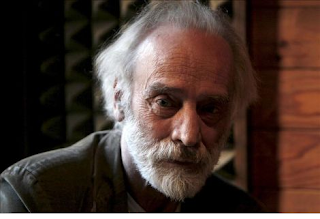 "Spanish folk singer Javier Krahe has gone on trial in Madrid this week, charged with "offending religious feelings" as a result of a 2004 television broadcast of a short film he made in 1978 entitled 'How to Cook Jesus Christ'.

Krahe's short film was banned in Spain under censorship laws when it was originally released in 1978, but it was used by a Spanish TV network in 2004 as part of a programme about the artist and his provocative work. The case against Krahe has been brought by a Catholic legal organisation, the Centro Juridico Tomas Moro, and follows two failed attempts to prosecute him over the broadcast. According to the Centro Juridico, the law against "offending religious feelings" has not previously been invoked in a Spanish court.

Krahe has been bailed for €192,000, and says he will go into exile in France if he is convicted."

Read more here.
Posted by Brett Hetherington at 12:44 PM No comments: Links to this post

The greatest Eurovision song contest ever? Well,certainly since I can remember.

This year’s contest was notable for a number of reasons. Apart from the involvement of Azerbaijani military and government family members on screen, there was a startling amount of quality singing, songwriting and overall music production.

In the past many people (including me) have laregely associated the word “Eurovison” with tack, crass and excrement. 2012 was decidedly different. I cringed and laughed quite rarely over the 2 hour show, held in the city of Baku in the “Land of Fire,” [ie. Azerbaijan.]

One of the personifications of this step up in quality was the stunning and tastefully forceful performance of Spain’s Pastora Soler singing Quédate Conmigo [Stay With Me.]


A 17 year veteran from Seville, she only made 10th place but that is hardly the point. The contest was won by Sweden and their song was also a fine bit of work, as was Albania, Estonia, Germany (!) Ukraine and even Romania did a pretty good job entertaining the worldwide TV audience.

I just couldn’t help wondering why this year Eurovision was so much better. I theorise that musicians and songwriters who would usually avoid the yearly contest were this time brought forward by the hard economic times across the entire region.

Posted by Brett Hetherington at 11:20 AM No comments: Links to this post

Why I Write (and) What Tom Wrote 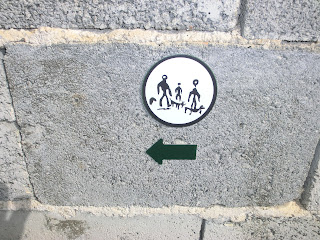 I bother to write blogs for a number of reasons but one motivation is communicating with readers about Catalunya/Spain/Europe and related subjects.

Recently I received a comment from Tom (an architect in London) and we exchanged a few emails.

His description of Barcelona as a" fabulous seedy, ancient, proud, buoyant place" is as accurate a string of adjectives I have ever read about the city, and pleasingly free of clichés. In fact what he wrote about Spain was certainly as insightful and well put as anything I can do and his connection with this country intrigued me.

With Tom's  permission, I quote from him verbatim below:

"My mum was a refugee there during the Nazi period. My childhood in suburban Bristol in the west of England was improved by her experience. Our Christmases were always marked with turron de jijona which I still love. But it has to be good. The second-rate stuff is an insult.

The architectural scene in London isn't great. We can't rely on booms to fuel our economy anymore. The edge isn't as sharp as it is in Spain. Perhaps a social movement will coalesce out of the Spanish experience.

I found myself reading Saul Bellow's Letter from Spain the other day which is dated around 1948. The picture is of pure suffering. The indignados are referred to again.

The story of Spain is of suffering. The biography of Picasso describing decrepit flats in Madrid tells the same story of poverty.

We were in Galicia this summer. Of course, the suffering has been put to one side by material improvements exactly the same as anywhere else in Europe. And one sees on the beaches how well the Spanish play, how good-natured the young are with each other.

I love the bird-like clatter of their fast tongues. I would dearly love to convert my tourist Spanish to something better.

Spain is really something. The whole construction boom, the corruption, the political ignorance, the cynicism of the wealthy - none of that detracts from the wonderful country - Los Picos, Galicia, Madrid, Barca, Menorca, the Pyrenees, the pines, the sea . None of it detracts from Barcelona's gothic Cathedral - a remark which applies a thousand times over. Or the food.

One hopes the poisons of cheap wealth will not alter defeat what's great about the country.

It has not been blessed with great politics. Yet it is seems a country at home with the modern condition. It has embraced change."

Posted by Brett Hetherington at 10:27 AM No comments: Links to this post

Mayte Martín this week launched her new release via 'crowdfunding', financing through public contributions via her website: www.mayte-martin.com.

In an interview quoted at El Noticiario Flamenco she called this “kamikaze” but also said “at least it is ‘free.’”
Posted by Brett Hetherington at 1:16 AM No comments: Links to this post 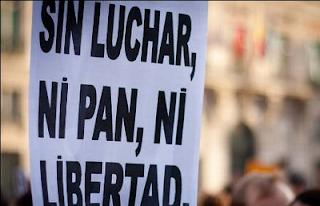 Photos of various protest banners from the marches across the country yesterday.

Posted by Brett Hetherington at 6:35 AM No comments: Links to this post

How Guardiola and his team did it all 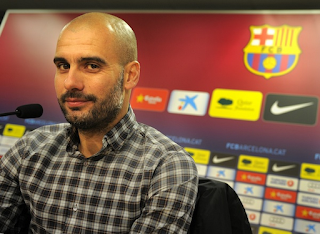 "Before getting into the detail of their game, it’s crucial to understand just how much of it comes from Guardiola. When a Barcelona vice president mused to me four years ago that she’d like to see the then 37-year-old Pep be made head coach, I never imagined it would happen. Guardiola was practically a novice. The only side he had ever coached was Barça’s second team.


However, people in the club who had worked with him – men like the club’s then president Joan Laporta, and the then director of football Txiki Beguiristain  - had already clocked him as special.  Not only did Guardiola know Barcelona’s house style inside out. He also knew how it could be improved."

[Thanks to Matt for this link.]
Posted by Brett Hetherington at 9:29 PM No comments: Links to this post

Treating the sick..."illegal" or not 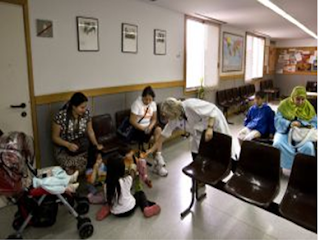 An inspiring story from the Murcia region this week.  A group of medical staff are simultaneously defending the existence of this nation’s universal public health system as well as the rights of those who are some of the “most vulnerable:” unregistered “illegal” immigrants.

They are resisting the government´s moves towards discrimination and have decided to treat the sick whether they “have [residence] papers” or not.

Their argument is that it is against Spain’s  constitution to deny anyone entry into public health centres. They also maintain that blocking access to treatment could result in dangers to the entire population’s health because it could lead to the spread of infectious diseases.
Posted by Brett Hetherington at 12:55 AM No comments: Links to this post 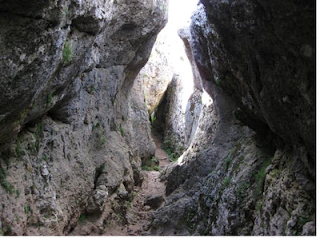 "Forming a labyrinthian stone maze are the natural karst formations of the Los Callejones de Las Majadas or the "Alleys of Stone."

Besides the maze like set of "alleys" the stones also resemble bridges, arches, walkways, stone people, doors, plazas, and monoliths all named accordingly: the Dog, the Whale, and many more.

The unusual rock formations were sculpted by slow differential erosion by wind and water over millions of years. The twisting passageways are easy to get lost in, and so two main walkways are marked through the "alleys."

Cattle herders in the area have used the stone walls as natural cattle enclosures for hundreds of years, and in some places you can still see remaining pens." Photos by jfpozo Source: www.panoramio.com
Posted by Brett Hetherington at 9:01 AM No comments: Links to this post