"“We have a major imbalance between savings and investment. We have the highest savings rates in the history of capitalism and lowest level of investment. You only have to state that to realise what the source of our troubles are.”

Speaking at FundForum International 2017, former Greek Finance Minister and DiEM25 Co-Founder Yanis Varoufakis sat down with FundForum Correspondent Emma Walden to talk about the state of global markets, the role that politics plays in economic stability, and what that means for investment in years to come."

Varoufakis understands that the democracies of the world have consistently rejected full-blown Communism.

For this reason we all have to accept that a version of Socialism is the only option that can succesfully be advocated and implemented with the fair consent of the populace.

To impose a system of government and economy on people without enough wider support is doomed to quickly fail.

The people must be brought along by their leaders rather than dumped on. That is not utopian. It's practical.

Wealth can then be redistributed with only the wealthiest against it happening.

The DiEM25 movement backs this idea.

Posted by Brett Hetherington at 12:29 AM No comments: Links to this post

An extremely detailed and well-produced English language PDF on the various parts of Catalonia (for tourists and travellers) is available for free here.

Posted by Brett Hetherington at 6:51 AM No comments: Links to this post

"Echoes of history at Europe's borders"

"Almost a century after a mass “exchange” of Muslim and Christian minorities, the Aegean coast sees a new wave of refugees.


Last March, history repeated itself on Turkey’s Aegean coast after a 94-year hiatus.

Across the water that separates the country from the northern Greek islands, boats carrying refugees – the vast majority of them victims of today’s wars in the Middle East – traced the journeys of the boats that carried unwanted Muslims and Christians between the newly formed Republic of Turkey and Greece in 1923, when the two countries agreed to exchange their respective minorities by mass deportation.

It seems to be the fate of this misleadingly tranquil coastline, dotted with olive groves and fishing villages, to witness politicised human traffic on the borders of Europe.

Ayvalik lies just ten nautical miles east of the Greek island of Lesbos, on which thousands of refugees are still held in detention camps. The island of Cunda, accessible via a bridge from the main town of Ayvalik, is a sleepy harbour town of vague nostalgia and faded beauty, of crumbling villas converted into cheap hotels, and abandoned churches converted into mosques or automobile museums. The town has largely resigned itself to tourism, and several high-profile industrialists have built discreet holiday homes on its shores.

Until 1922, Ayvalik was an entirely Greek Orthodox town in the heterogeneous hodgepodge of the Ottoman Empire; a hive of trade and commerce, bustling with merchants, olive farmers and black-robed priests. All the Christians who once lived there were either killed in the last years of Turkey’s War of Independence (1918-22) or shipped off to mainland Greece in 1923, to be replaced by Muslim Ottomans, many of them from nearby Lesbos. In total, 1.2 million Christians were “exchanged” for 400,000 Muslims – almost the totality of each minority residing in the two countries, with the exception of those living in Istanbul and Western Thrace.

Today, the elder generations of the imported Muslims who replaced Ayvalik’s former Orthodox inhabitants sit playing backgammon under slowly turning fans in seafront cafés: weather-beaten but upright, dignified men chatting quietly in a mixture of Turkish and a Greek dialect learned from their parents, who were brought here from the Greek island of Crete in 1923. The dialect is Cretan, or “Giritli” as the Turks call it – a rougher version of standard Greek, incomprehensible to other Turks and to mainland Greeks."

Posted by Brett Hetherington at 11:42 PM No comments: Links to this post

"Real red: Corbyn, Goytisolo and the rallying of the left" -- My latest opinion column for Catalonia Today magazine 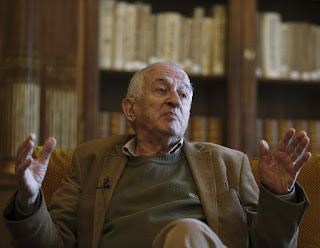 Elections can be strange events. The British one last month produced a mixture of results but one thing it showed was that a genuinely democratic socialist government there is a distinct possibility after the next time the nation goes to vote again.

For the first time since the mid-1940s, the Labour Party in the United Kingdom, led by underdog Jeremy Corbyn is offering a collection of policies that are not a softer, pale imitation of the Conservatives and roughly supporting the economic and social status quo.

This Labour party with its election programme (or ‘manifesto’) was full of plans to tax the richest in society and increase company tax to pay for better public funding of schools, hospitals and social care, all of which have been cut away horrifically by the Cameron and May governments since 2010. In truth, many of these severe austerity policies had actually begun under previous Labour leaders in power.

Corbyn however has moved his party clearly to the left and many of his ideas proved to be popular during the last few weeks of the election campaign. Theresa May lost her majority in parliament but we simply cannot know for sure how much this was due to her bumbling campaign and how much credit Corbyn can rightly claim.

What we do know is that over 70 per cent of young voters in the 18 to 24 age bracket voted for Labour candidates. Partly, this must have been due to Corbyn’s policy of guaranteeing free university places for all, instead of the current system which demands exorbitant annual fees but it seems that his appeal was wider than just this one promise.

His more concrete and costed commitments to put the rail network back in public control and reverse the creeping sell off of the NHS public health system also appear to have found support from the young to the old. Labour’s pledge to raise the minimum wage to 10 pounds an hour was another vote winner. It showed that they have once again gone back to their red roots and are not afraid of being labelled radical by the establishment-controlled media.

Another progressive iconoclast who has lived by his left-wing beliefs and regularly paid a price for doing so is Barcelona-born writer Juan Goytisolo [pictured above], who sadly died at the age of 86 at his adopted Moroccan home in June of this year. As a critic of General Franco and conservatism in general, he was known across Europe for his books such as “Campos de Níjar,” a travelogue that detailed the harsh social and economic conditions in 1950s Andalucia (translated into English by Peter Bush.)

As a writer, I was also inspired by Goytisolo’s autobiography, “Forbidden Territory”. It is rare to read such brutal honesty about his own evolving sexuality and highly-personal inner landscape. Through creamy prose, he makes a sharp dissection of the “ill-formed universe” of his bourgeois upbringing. We can only hope to see others follow in his wake.

[This article was first published under the title "The rallying of the left" in Catalonia Today magazine, July 2017.]
Posted by Brett Hetherington at 10:51 PM No comments: Links to this post

'Ours is not a bloodline, but a textline'

"I just found out only a few weeks before coming to Girona, that through the Horowitz branch of my family, I am Gironan, through my forebear Rabbi Isaiah Halevi Horowitz. This made me shudder a little bit, but I still don’t believe in God. I don’t think it’s a coincidence; I think it has to do with the secular movement of Jewish continuity."

Israeli writer and historian Fania Oz-Salzberger who was interviewed by Catalonia Today editor Marcela Topor here.
Posted by Brett Hetherington at 11:03 PM No comments: Links to this post