I pass this extraordinary bridge regularly on the way to and from Barcelona and always give it a second look and a series of thoughts.

(Whenever I see it I always think of a slightly similar bridge, the Stari Most (in Bosnia) that was famously blown up in the war there 20 years ago this November. My memory is of watching an explosion causing it to fall, broken into the river. [See 3:00 at the video below])


But the bridge at Martorell has a similar effect on me in that I get the sense I am looking at a creation from a long way back in some medieval past. Just like walking through Kyoto's very old Ponto Cho area, even after dozens and dozens of times of seeing it, I never get blasé about it.

“The Puente del Diablo, or Devil's Bridge, crosses from Martorell to Castellbisbal in Catalonia, and its gravity defying structure has a surprising stabilizing device. The bridge was originally built over the Llobregat River in 1283 over a former Roman bridge, the remains of which can still be seen around the current bridge, including a triumphal arch. If it doesn't seem quite right for medieval times, the bridge was actually destroyed in 1939 during the Spanish Civil War and rebuilt in 1965. However, much of it is still the original stone.”


See more photos of the “Devil's Bridge” at Martorell at Atlas Osbscura here.


Posted by Brett Hetherington at 3:11 AM No comments:


"As the centrepiece of an ambitious experiment to make cities more efficient and easier to live in, Santander in Spain is being hailed as the smartest in Europe. With thousands of near-field sensors installed throughout the city, Santander authorities say they have created a technology template for others to follow..."

Posted by Brett Hetherington at 9:51 AM No comments:

"How Europe's solution for the crisis is actually the problem " "Europe's current crisis is more than economic. Between the German government advocating a dangerous austerity policy and European authorities lacking any other suggestions, it is clear that the 2008 financial crisis is no longer solely responsible for the downward spiral of Europe.
The GDP for countries in Europe has fallen by a considerable amount: 5.3% for Greece, 3.9% for Portugal, 4.1% for Cyprus, 2.3% for Italy, and 2% for Spain. This is without even mentioning the recession into which France is entering. In the first quarter of this year, the European Union economy contracted by 0.7%, or one percent when only taking into consideration the eurozone."

Posted by Brett Hetherington at 1:32 AM 2 comments: 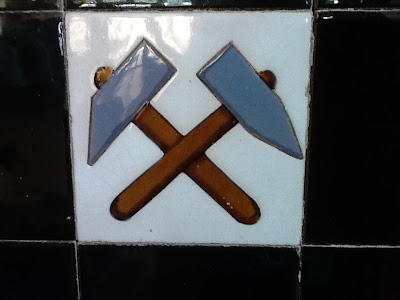 The coal miner's wife wakes him and he coughs. He goes to the small bathroom sink and spits black liquid, washing it away with with the brown tap water.


Last night he slept badly because he had stomach cramps, diarrhea and vomiting again. Until last year he was working in the zinc mine at Arnao in Castrillion but the Belgian company let him go to the San Juan mine, where he considered himself quite lucky because at least there they had a river pool for the miners to wash in.

As he leaves for another day under the earth he looks for a last time at the mountains, their ferns and the tall groups of eucalyptus - pencil thin, not quite straight, but just like the trees in a Dr Seuss book. He sees the houses with their sharp pitched roofs, the deep gorges and is comforted by the roll of the hills in this green and pleasant land.

But it is only a pleasant land for some.

The miner lives before the era of the chemical plants and the big metal factories. He knows others who dig for iron and he knows it is vital for tinned food because electricity and refrigeration has not yet arrived to this part of the world.

His mine, like many mines, is close to a river and the river is a means of transporting the coal for trading this raw material with British towns like Cardiff and Newcastle-upon-Tyne (where my father was born and grew up next to a river also.)

This miner's children will see chemical industries grow, thanks to the mines, thanks to his labour.

Today, like thousands of other days he will throw his body into the ground and probe for hour after hour for that black gold. At the end of the day he will take aspirin for his aching bones, smiling at the ironic fact that it has ingredients made from the very coal he has been digging at.He does not yet know though that his children will one day eat kiwi-fruits and chestnuts that grow particularly well in the carbon-coloured soil left in the abandoned open mines that are scattered across the nearby hills.

As the miner eats his simple lunch with his hands still blackened by coal dust, he remembers his father, who was also a miner. This man worked to extract the iron that was in such high demand for both 20th century world wars – a metal that helped the country become richer. His father had started his life as a rural worker and had to adapt from the rhythm of the seasons to the very different rhythm of an industrial timetable. It was necessary to learn to accept days and nights with no sky or trees when he was underground in the mines, which sat right next to his tiny terrace house.

Like every other subterranean labourer, his father and he both wondered if life could be different for them. He had heard that it was a bit better at the one and only mine run by a trade union. But it was on the other side of Asturias and he had never even visited there.

Our miner lives in Bustiello town and all of the Marques de Camilla's workers have their neat little houses below everyone else, at the very bottom of the valley. It is an orderly, rectangular village and each house has a little garden.

Up the hill above them live the engineers and above them is the church then god of course. This is what he knows. The planning of the town exactly reflects the social and spiritual hierarchy because the Marques is a conservative man - not in the least progressive.

Up in the mountains though, there were some mining zones that suffered from “special measures” during Franco's dictatorship. Around Pozo Fortuna trade union activists were assassinated and their bodies were thrown down an old pit-hole.

Our miner speaks about this sadly with his friends and falls asleep hoping that the bad times would end.

In the morning, he rises and faces another day.

Posted by Brett Hetherington at 5:06 AM No comments:


"The exposure to music during in vitro fertilisation has a positive impact on the fecundity rate of egg cells according to a study developed by the assisted reproduction centre Institut Marquès, based in Barcelona.

The study concludes that the micro vibrations in the music shake the culture liquid in which the ovum swims and this improves the distribution of nutrients and also avoids the accumulation of toxic products around the cell. As a result, the fertilisation of the ovum is facilitated by the effects produced by the vibes, and the fecundation rate is improved by 4.8%.

Three styles of music were tested (pop, heavy metal and classical) but no significant differences were observed in relation to the different frequencies. The study was carried out on 985 egg cells from 114 patients. It is the first study of this kind made on human egg cells."

Posted by Brett Hetherington at 10:57 PM No comments: