"This weekend, DiEM25 lands in Rome to present its “European New Deal..."


"It’s the EU’s 60th birthday this weekend, and leaders of all EU countries will be in Rome that day to celebrate it.

Their goal? To preserve the status quo.

We, the Democracy in Europe Movement, see things differently. We want to give the people of Europe a real alternative to the Establishment and the rising ‘nationalist international’; a progressive path to save Europe from itself.
That’s why this weekend we’ll be landing in Rome to set that alternative in motion, over three days of events and important announcements.

And we invite you to be part of it!"

Read more at DiEM25's comprehensive site here.
Posted by Brett Hetherington at 1:00 AM No comments: Links to this post 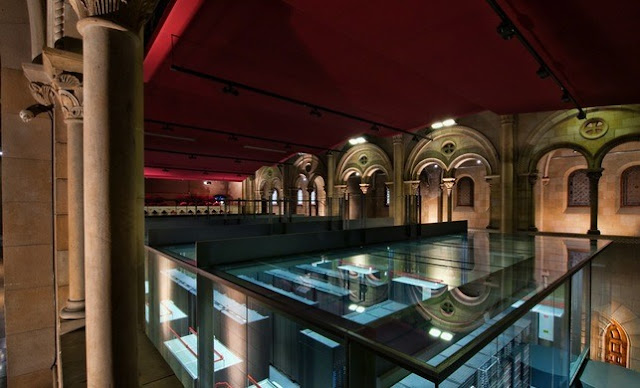 A place I was lucky enough to once do some language work in...

"One of Europe's largest supercomputers is housed inside of a disused chapel.

What was once a...place of worship known as the Torre Girona is now the home of the Barcelona Supercomputing Center, filling the expansive main hall with banks of futuristic computer equipment under glass.

Since 2005 the former church has been home to MareNostrum, one of the most powerful supercomputers in Europe that was instrumental in developing modern microchip technology.

The giant machine is used to perform the massively complex calculations involved in such fields of research as human genome mapping, astrophysics, and weather prediction. Physically the computer consists of a number of black computing stacks that are all encased in a giant glass box, which itself sits in the romantically-styled main hall of Torre Girona.

Rebuilt after the Spanish Civil War, the Torre Girona is a 19th century church that sits on the campus of the Polytechnic University of Catalonia.

The space was used as a Catholic church until at least 1960, when it was deconsecrated. Since then, it has been used for more functional purposes, finally being inhabited in full by the supercomputer and its attendant offices.

MareNostrum may not be the most powerful computer in the world any longer, but it will likely remain the most visually appealing for years to come."

Posted by Brett Hetherington at 4:45 AM No comments: Links to this post 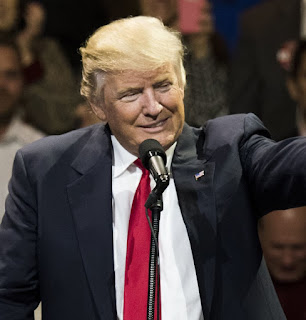 There is really only one news story over the last months: the start of Donald Trump's regime.

Before the end of last year I said on Matthew Tree’s TV discussion program that one of the main reasons Trump was elected was that he knows that (now more than ever) politics is an entertainment industry.

I also said that Trump would have been defeated by Bernie Sanders, the other alternative candidate in the Democratic party who offered a genuine agenda of change rather than Hillary Clinton’s message of a continuing the same for another four years.

Trump found the votes he needed in the parts of the country where he needed them because he stood for a major shake-up to a system that clearly needs it and because he repeatedly promised work again to the unemployed.

When I talk to people here in Catalonia, plenty of people use the word “confident” about Donald Trump. What seems to me as his grotesque arrogance then, is seen by others as a can-do attitude and has given a false hope. And it is also this that helped propel him into the White House.

Large numbers of the public are prepared to ignore his clear personality faults because Trump projects the persona of someone who is an action hero, a cowboy, a maverick but a ‘do-er’ as well as a big talker. And a significant chunk of the popular media has continued to be sucked into reporting his ‘colourful antics’ and ‘controversial statements’ rather than the policy decisions he has already taken in his first weeks in charge.

Even as I write this article, I have to struggle to concentrate on the detail of the executive orders he has just signed rather than talking about his inflammatory Twitter posts. It is easier to look at what he has tweeted than what he has, with a stroke of his pen, made into law.

On a daily basis the airwaves and worldwide web are awash with his decisions but the hour-by-hour short news cycle can never dwell for too long on a single issue and Trump thrives on this fact as much as he enjoys letting it drag him into the gutter.

Recently, several journalists who covered the protests at his inauguration were charged. With exactly what offence no one's quite sure at this moment but this intimidation tactic is likely to have its desired effect.

As well as this, the Spanish language version of the Presidential website was shut down: a clear signal to the US’ hispanic citizens that they are disposable too in the wider sweep of life.

These are actions, not words and they are Donald Trump’s actions. Despite this, his distractions about voter fraud and the size of the crowd at his first speech as commander-in-chief have been publicised a great deal more than his decision-making, as if his social media presence was more significant than the impact of his policies on ordinary people.

It is more than apparent now that those who thought Trump would soften his attitudes and become sobre and responsible once sitting at the Oval Office desk were wrong.

He is just getting warmed up.

What we will witness in the next four years (or possibly even eight years) is guaranteed to be an extreme exercise of naked power as a simple extension of his ego. It will be unlike any other term of office in that corrupt superpower ‘democracy.’

The crucial question is how much congress is going to stand up to Trump’s will. My prediction is that the majority Republican party will typically bend to his wishes.

I was woken up at five o’clock in the morning by a dream about Trump and immediately decided to write this article. In my dream Trump was on a television talk show and left the set complaining and throwing his earpiece on the ground.

The truth is that he no longer needs to even appear on TV. We are all doing his PR for him and I would argue that his tweets should be completely ignored by all media, in effort to starve him of easy air time.

But after all though, Donald Trump is the logical result of a society obsessed with money where worship of wealth is as deeply engrained as feeling for the stars and stripes flag.


[This article was first published in Catalonia Today magazine, March 2017.]
Posted by Brett Hetherington at 1:28 AM No comments: Links to this post

Is Spain a parents' paradise? - A reprinted except from my book "The Remade Parent"

Republished this week on Child in the City was the following extract of my non-fiction book, The Remade Parent...

"Different countries have different relationships with their children, something that can be especially evident to immigrants. In his new book, The Re-Made Parent: why we are losing our children and how we can get them back, the Australian, Brett Hetherington, a resident of Barcelona, wonders whether Spain may just be a ‘paradise’ for parents. We publish edited extracts here.


Some parents (including myself) believe that, compared to many other countries, Spain is generally a more physically secure place for children and adults alike. For instance… In 2000, the Parliament in Spain’s autonomous region of Navarra passed a ground breaking law allowing all registered couples in that region (including same-sex couples) to adopt children. (In the first Chapter of this book I made the point that a parent should be thought of as anyone who can provide to a child continuous care, concern and affection.)…
The pride that so many adults and children have of their town and region means that they often take an active interest in defending it and being part of its collective life. A lot less Spaniards move away from their home area than say, North Americans, which creates bonds of attachment to the people and places of they grew up with. In other words, adults and younger people “know their roots” here and have a fundamental respect for them.

Related to this point above is the fact that in Spain there are plenty of public open spaces that are not there to be commercial. The plazas are not shopping centres and the ramblas are not principally designed for trade. The parks are many and they are not “retail parks” for buying and selling. The town square is not a “mall” but is instead reserved for festivals or protests.
All these places are for idling, strolling, gathering and talking, socialising and playing. They are social by their nature and they function as spaces for community activities rather than for simply spending money. To someone like myself who grew up with the focal point of young life being a multi-storey shopping centre, I am happy to know that my son and his friends will not be spending their free time sitting around in a place where everyone is first and foremost a consumer.
Blanca, a mother of three who has also lived in several countries outside the Iberian Peninsula has a view of Spain that certainly sums up many of the benefits of residing in this country. Her words make a fitting conclusion to the case in favour of Spain being a parental paradise:
“I think children feel more free here than in many other countries. They can run and play because you can count on friends and neighbours. In England I didn’t feel this. People there just mind their own business and look the other way. We all know each other here and you spend more time together.