Video: Not your average day...in Sabadell


Following on from my January post of some flashmob footage from a Spanish employment office, now comes another recent and similar event (but even more beautifully filmed and choreographed) in the city of Sabadell, just inland from Barcelona.


(I've chosen the version with minimal corporate sponsorship, from a Korean youtube user.)

Thanks to Danielle G.
Posted by Brett Hetherington at 5:18 AM No comments: Links to this post

The colours of corruption 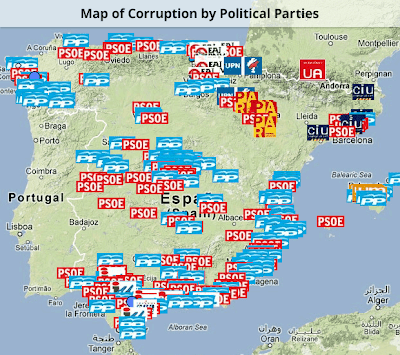 ...from Global Mail's detailed breakdown of the illegal activities and “culture of kickbacks” that have been going on here for some time now.

It makes for deeply disturbing reading.
Posted by Brett Hetherington at 8:17 AM No comments: Links to this post 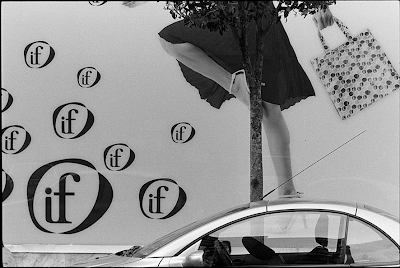 [Photo by Javier at sic.]

As one of Spain's greatest living writers, Antonio Muñoz Molina is someone always worth reading and this short piece of his in the English language version of El Pais is no exception.

He expresses some opinions about Spain that I have long thought true about my country of birth, Australia. Muñoz Molina lives part of the time in New York and has that particular kind of clear sight about Spain that only living away from your native land can bring.

I'm not sure I fully agree with him about all that he says though. Compared to somewhere like Australia I think there is a richness of culture that is acknowledged by many locals and to say you are a writer or journalist provokes more interest from the average person here than in Australia, at least in my experience.

But then again, MM should know. I suspect that his opinions are largely based on contact with business people and middle-level public officials, who (all across this planet) generally put making money ahead of anything else as piddly as the creative “industries.”

Somebody who has never written a book or put-together a well-researched article would probably have no idea what it takes to do so, just as I have no clue (or real interest) in deal-making and political schmoozing.

Posted by Brett Hetherington at 12:02 PM No comments: Links to this post

"Moulaye Ndiaye, a street vendor and native from Senegal, was thrown from a bridge on the eve of the 2012 Tomatina Festival in Buñol, Valencia, Spain.


Moulaye was selling his products at the festival when a young man stole his sunglasses. After asking, without success, for the man to return them, Moulaye decided to leave, and then he was shoved and pushed over a bridge more than six metres from the ground. The backpack which he was carrying and the reeds growing in the area where he fell [probably]saved his life.

He spent a month in intensive care at the Manises Hospital with traumas, several broken ribs and a spinal injury. The assault has caused him to lose sight in his right eye and a very serious neck and back injury has prevented him from working since.


In its blog, and on its Facebook wall, the Movement Against Intolerance seeks the help of those who witnessed the assault, asking them to make contact with the organisation so that the case can remain open, as the police have been unable to find the aggressor who escaped into the night. There has also been a large civilian mobilisation  which still continues, and the residents of the town of Buñol say they are horrified at this tragic event."

More details here at Global Voices online.
Posted by Brett Hetherington at 11:09 AM 2 comments: Links to this post

Under the slogan, "Water is a service, not a business," thousands of villagers in Laguna de Duero (Valladolid) have successfully stood up for almost a year to their mayor's plan to privatize the water supply in the municipality.

Read more at La Marea here.
Posted by Brett Hetherington at 7:23 AM No comments: Links to this post

What I notice from this film is the other-worldliness of Spain at that time.

The buildings are vaguely recognisable but the men ride donkeys like timeless, rural Africans and the women sweep dirt streets with bent backs because their brooms do not even have such a thing as a simple long handle.

Their faces generally show hardship (something that has recently returned here with the “crisis,”) while skinny dogs scuttle around.

Later, we see teams of men working in the country with hand-held hoes and when a man speaks on the telephone it is surprising because the mental atmosphere of the film could have been almost medieval.

The war scenes reinforce how empty war always is. The attempts to glorify it with stirring music are hollow only partly because we know that the end result is a stifling dictatorship, four decades long.

In another scene, now in Madrid, ragged children play in the street and in the next frame a man hurriedly carries a seemingly empty coffin over one shoulder.

Food cues (for some people this is a reality again today) crowd next to destroyed buildings and a single corpse lies in the gutter. (We are told that the body is that of a book-keeper on his way to work at eight in the morning.)

After more battle scenes and shots of noble-peasant types the film, now clearly a piece of propaganda, ends with a man's voice singing a very moving a capella song, ruined somewhat by Hemingway's voice-over.

For a detailed explanation of the making of “The Spanish Earth” see Open Culture here.

Posted by Brett Hetherington at 2:31 AM No comments: Links to this post

Every time that Barcelona FC plays Real Madrid it is a big event but (surprsingly) Iraq's Kurdish population are just as divided as the rival capital cities here.

"Those who support Real are usually richer people, while the poorer people are more likely to support Barca.

Barcelona fans appear to be more numerous, probably because Kurdistan and Catalonia are both regions pressing for greater autonomy...

Last August, a banner was unfurled in the stands during an El Clasico in Barcelona's Nou Camp stadium bearing the words: "Kurdistan is not Iraq / Catalonia is not Spain"

Read more here.
Posted by Brett Hetherington at 1:18 AM 4 comments: Links to this post