"Lebanese author Hoda Barakat has won this year’s $50,000 International Prize for Arabic Fiction (IPAF) for her epistolary novel The Night Mail (Dar al-Adab), only the second woman to get the award.

Judges picked Barakat from a six-strong shortlist featuring a record four female authors. She was announced as the winner at a packed ceremony in Abu Dhabi...on Tuesday night (23rd April).
In addition to winning $50,000, funding will be provided for the English translation of The Night Mail. An English edition has already been secured by Oneworld, scheduled to appear in 2020, and Barakat said the book, with its themes of migration, would be "very interesting" to readers in the current UK climate.
Her novel tells the stories of its characters through letters written to their relatives in Lebanon, interconnecting and overlapping during the course of the work. They left not only because of war but their home’s painful past and uncertain future. Its theme is described as “one of deep questioning and ambiguity, where boundaries have been erased, and old places and homes lost forever”.
In her speech, Barakat, who left Lebanon during its civil war and now lives in France, revealed she nearly did not enter the prize this year after only being longlisted in 2013 for her novel The Kingdom of This Earth (Dar al-Adab). However, she said Booker Prize Foundation chairman Jonathan Taylor helped convince her to enter again. She said: "The Arabic language is more important to me than any prize."
Speaking afterwards, she explained: "I don't seek exposure, I don't seek popularity."
"I don't care about statistics and numbers," she went on. "If I sell 15 books it's fine, if I sell 50 books then that's better."
She also praised the other shortlisted novels, saying: "This is proof that Arabic fiction is growing in position and stature to an equal level with other novels." "
Read more from source at The Bookseller here.

Posted by Brett Hetherington at 11:19 PM No comments: Links to this post

"Resisting the right: the woman who is a beacon of hope in Salvini's Italy" 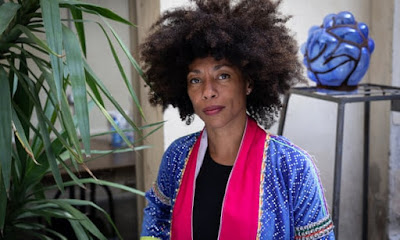 "Antonella Bundu is the lead candidate in a coalition of anti-fascist radical-left parties...

On a peaceful Monday morning in March 2018, a Senegalese street vendor named Idy Diene was murdered on the Vespucci bridge in Florence.
The man who fired the six fatal shots was an Italian pensioner who told the police he had shot randomly at the first person he encountered. He had previously attempted to take his own life.
Antonella Bundu, 49, was one of the first people to arrive at the scene. She burst into tears when she was told that under the blood-stained sheet lay Diene. She had come to know him well, watching him set up and take down his makeshift table of cigarette lighters, tissues and umbrellas.
That afternoon she took part in the protests led by the Senegalese community in Florence. Diene had become the most recent victim of a series of attacks against Africans in Italy as anti-immigrant propaganda, spread in part by the far-right leader Matteo Salvini, continued to circulated in mass media.
Since that day, the number of racially motivated attacks against migrants has risen sharply in Italy, tripling between 2017 and 2018, and Salvini has become interior minister. One year after Diene’s death, spurred on by the climate of intolerance and racism that has spread throughout the country, Bundu has decided to run for mayor of Florence. The daughter of a Florentine mother and a Sierra Leonean father, she has become the first black female candidate for mayor of a large Italian city.
She is the lead candidate in a coalition of radical-left parties including Potere al Popolo (Power to the People) and Rifondazione Comunista (Communist Refoundation). The vote will be held at the same time as the European elections on 23-26 May.
“Until a few months ago I never imagined I could take on such a role,” Bundu told the Guardian. “Then a movement tied to the left invited me to speak at the Alfieri Theatre in Florence. I was given one word on which to improvise a seven-minute speech. The word was ‘black’. Without hesitation I poured out about what was happening in Italy. I spoke about myself, my story. They must have liked my monologue, because they immediately asked me if I’d be interested in running for mayor’s office.”
Read more about her story at source here.
Posted by Brett Hetherington at 11:45 PM No comments: Links to this post

Without barely noticing it, we are routinely doing two things (or even more) at the same time.

I don’t mean having the TV on in our houses, as Juan Goytisolo called it, “Spanishing on” in the background like in a typical bar here.


What I continually notice is that our daily lives are an action movie of driving while texting, texting while watching TV, watching while screen-scrolling, scrolling while not listening to our companions.
Without questioning, our species silently changes what we do. Only 25 years ago, the phone had a fixed place in the hallway. Now it’s wherever we go. Some use it to shop at midnight or gamble and simultaneously watch sport.
We experience a collective near-addiction to the stimulation that technology provides and this means that we are caught in our own man-made bubble of fixation, at work, at home and in between.
Piled on top of this, personal identities are more and more undefined. The more fashionable among us are flexitarian, pan-sexual. What was private is now openly public. We are selfie-supermodels: silicon titty down-shots and dick-picks for the under 30s.
Even what was someone else’s body can now be yours. There are women you can find wearing hair extensions from an unknown Chinese stranger.
Some do the opposite and cling to identity. I’m my race, let’s leave Europe, get out of MY country, “walls are good things, barbed wire can be beautiful” says Trump, “eat my shorts” says Homer Simpson.
And who still has a 20th century-style job? The blurring of life-lines has of course crossed over into the world of employment. Oh, you’re a consultant? He’s freelance, she’s a temp/intern/trainee and that kid makes big money from playing computer games. The rest of them all have zero-hours contracts.
In fact at this moment in time, my own income comes from seven different sources. I’m a teacher/journalist/translator/author and occasional recipient of parental financial help...at age 50.
I currently go to how many different work locations?
Apart from my own home, which is also a workplace, the answer is: 10. That is over five days. Imagine, too, how many more it would be for a truck-driver, a Deliveroo bike-rider, a home-shopping deliverer or an Amazon door-to-door courier.
Added to creeping uncertainty and the old ways being so far gone, across this fragmented society there are “a million mutinies now,” as the author VS Naipual once wrote.
To unconsciously fight against the disappearance of any real certainty in our lives, internal reactions are made into actions. Gay bashing, wife-bashing, woman-hating, immigrant-hating, Muslim-hating, Jew-bating, tail-gating, restaurant-rating, bomb-making, piss-taking, muck-raking, reality-faking.
All with the momentum of a mudslide that doesn’t want to stop.
And what are we now scared of? Not the bullies. Plenty of people are frightened of the failed-economy’s victims. People with next-to-nothing: refugees, the homeless, beggars.
We are not afraid of the unknown (giant multinational companies, faceless billionaires. They are all too abstract). We are fearful of The Other.
One of the ironies here is that as a result of this ‘loss of separation’ and things being so indistinct (possibly because of it) we are probably further away from each other emotionally and physically, even when we eat.
The French are continuing to be an exception to this trend but research has shown that more than one in five [British] families “only sit down to eat a meal together once or twice a week. 40% of them only sit down together to have a meal three times a week.” The average American eats one in every five meals in a car!
All this has made me tired now. I suspect you are too.

[This article was first published in Catalonia Today magazine, April 2019.]

Posted by Brett Hetherington at 2:45 AM No comments: Links to this post 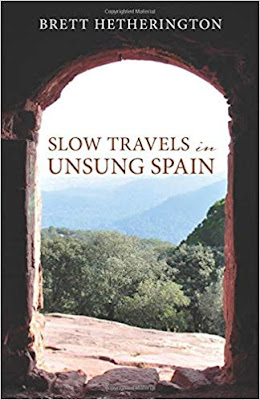 "a compelling and eclectic narrative full of the unexpected"
-- Nick Inman, Rough Guides

Slow Travels in Unsung Spain is a warts n’ all trip through some of Spain’s hidden gems: towns, cities, landscapes and cultural highlights that are typically overlooked by foreign tourists but which the Spanish often keep to themselves.

Posted by Brett Hetherington at 10:10 AM No comments: Links to this post

"My First Life as a Nurse"


"...Emergency Room: A motor vehicle accident. Mad with cocaine, a driver has wedged his sports car under a semi on the interstate. Partial (mostly complete) decapitation.
Emergency Room: A knife fight between two women who, after they are admitted, discover that their beds are only a curtain’s breadth apart. A skinny man, the object of their fight, tries to separate them.
Emergency Room: A slow Sunday night in the break room. A resident asks me if I’m really reading the New York Times Book Review or just pretending to. I’m not really sure.
Operating Room: A surgeon throws something heavy at me because I’ve handed him the wrong suture material. Another surgeon, three times my age, propositions me after I’ve tied the back of his surgical gown..."
Read more from source here.

Posted by Brett Hetherington at 1:23 AM No comments: Links to this post