An astonishing program was shown on public TV recently.

Spain's main public television station channel 1 featured a workshop for parents on “how to teach their children to dress appropriately” in its daily afternoon update on May 14, 2013. Although the report was barely a minute and a half long, it featured soundbites such as “it seems we live in an era when everything must be shown” and “the big question: is my daughter dressing provocatively?”

I don't believe there's actually anything wrong with discussing what kids wear in this country.

I just think there are a lot bigger problems such as use of over-technology, bullying, commercialisation of young people or infantalising them.

This TV program raised the question of “provocative” dressing by young girls. There is certainly a de facto summer-time “uniform” of very short jean-pants for teens and some pre-teens and this is generally conformed to by plenty of this age group.

The issue to me is not so much whether this is somehow provocative but whether girls are simply dressing like other girls because they think they should. Following a fashion because others do is sheep-like and dangerous more because it shows a tendency to act without individuality than it is wrong to show bare legs.

It is so much easier to focus on what we can easily see, rather than investigate deeper, more serious problems that are not so apparent to the eye.

(As is so often the case, the commenters on this Global Voices article are also really worth a read.)

Posted by Brett Hetherington at 8:04 AM No comments: Links to this post

There's a lot of good points about living here, including the usually very good public health system, but on top of the privatisation that is slowly going on there are some other worrying signs, as explained in this article...

“The European Commission has warned that it may launch infringement action against Spain unless the country's hospitals stop refusing emergency treatment to European Union citizens on holiday. The Commission is receiving reports, concerning 20 different hospitals, of treatment being refused to foreign EU nationals unless they pay on the spot.
Under EU law, member states must offer foreign EU citizens who present a valid European Health Insurance Card (EHIC) the same treatment as nationals for emergency medical care. The bill should then be submitted to the health authorities of the patient's home country.”
Posted by Brett Hetherington at 8:06 AM No comments: Links to this post

A Euro-kiss that dare not speak it's name

"Will Eurovision censor a kiss between Finland's Krista Siegfrids and a female dancer?
Turkey has just banned the show from being broadcast and now the press reports that there is pressure on Eurovision to cancel the kiss before Saturday's final. Eurovision organisers are worried other Eastern European countries might ban the contest too.

If the kiss is censored it would be a huge victory for anti-gay voices. But if thousands of us sign the petition calling for the kiss to go on, we can show Eurovision that there will be much bigger outcry if they choose censorship over celebration."
Read more from All Out's  page here.

Posted by Brett Hetherington at 10:06 AM 5 comments: Links to this post

A Spaniard asks "How?" 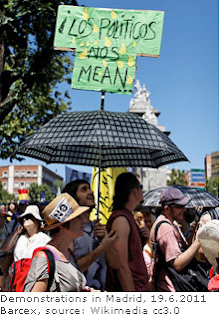 "Today, headlines from around the world resonate with the news that there are nearly six million Spanish citizens currently unemployed. Spaniards are in the process of losing their quality of life, along with their access to health, education and even food...

How is it possible for the country to accept that over half its population of under 25-year-olds are unemployed? How does a society sustain itself with over a million members living in households where not so much as a euro comes in by way of a monthly salary? How sick is a society when the only social group not to lose its purchasing power in recent years are the retired and when there are more than 150 home evictions per day?

Juan Luis Sánchez gives some answers in this article for Eurozine.

Posted by Brett Hetherington at 10:34 AM No comments: Links to this post

Catalan aristocrat is "a link between North Korea and the world."

Alejandro Cao de Benós, born in Tarragona, Spain in 1974, is a descendant of the barons of Les in the Aran Valley in northern Catalonia, the earls of Argelejo and the marquises of Rosalmonte. Besides his rather unusual lineage, it is unlikely that his name would be widely known if this 39-year-old Catalonian was not an important foreign spokesperson for the North Korean regime.

Founder and president of the Korean Friendship Association (KFA), he is an honorary special delegate of the country, where he is known as Cho Son-il, meaning “Korea is one”. In an interview with Tribuna Popular he explained the origin of his relationship with the Asian country:

Read more at this article from Global Voices.
Posted by Brett Hetherington at 2:36 AM No comments: Links to this post

My book, "The Re-Made Parent," to be published via a Barcelona agency 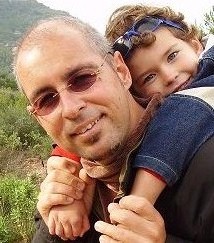 My non-fiction book, "The Re-Made Parent" is to be published via the Antonia Kerrigan Literary Agency in Barcelona (AK Digital, Amazon (and others) plus print-on-demand.)

(Thanks to Matthew Tree and all those involved in the long struggle to get to this point, finally.)


Posted by Brett Hetherington at 3:43 AM 2 comments: Links to this post