Orwell's Barcelona, December 1936 (& who really are the "wealth creators")

It was at a moment in Barcelona, of this same time, late in December 1936, that George Orwell chose to open his exceptional book “Homage to Catalonia.”

In the first page of chapter one, he describes how the city seemed to him then…

“The Anarchists were still in virtual control of Catalonia and the revolution was still in full swing. To anyone who had been there since the beginning it probably seemed even in December or January that the revolutionary period was ending; but when one came straight from England the aspect of Barcelona was something startling and overwhelming. It was the first time that I had ever been in a town where the working class was in the saddle. Practically every building of any size had been seized by the workers and was draped with red flags or with the red and black flag of the Anarchists; every wall was scrawled with the hammer and sickle and with the initials of the revolutionary parties; almost every church had been gutted and its images burnt. Churches here and there were being systematically demolished by gangs of workmen. Every shop and cafe had an inscription saying that it had been collectivized; even the bootblacks had been collectivized and their boxes painted red and black. Waiters and shop-walkers looked you in the face and treated you as an equal. Servile and even ceremonial forms of speech had temporarily disappeared. Nobody said 'Senior' or 'Don' or even 'Usted'; everyone called everyone else 'Comrade' and 'Thou', and said 'Salud!' instead of 'Buenos dias'.

Tipping was forbidden by law; almost my first experience was receiving a lecture from a hotel manager for trying to tip a lift-boy. There were no private motor-cars, they had all been commandeered, and all the trams and taxis and much of the other transport were painted red and black. The revolutionary posters were everywhere, flaming from the walls in clean reds and blues that made the few remaining advertisements look like daubs of mud. Down the Ramblas, the wide central artery of the town where crowds of people streamed constantly to and fro, the loudspeakers were bellowing revolutionary songs all day and far into the night. And it was the aspect of the crowds that was the queerest thing of all. In outward appearance it was a town in which the wealthy classes had practically ceased to exist. Except for a small number of women and foreigners there were no 'well-dressed' people at all.
Practically everyone wore rough working-class clothes, or blue overalls, or some variant of the militia uniform. All this was queer and moving. There was much in it that I did not understand, in some ways I did not even like it, but I recognized it immediately as a state of affairs worth fighting for. Also I believed that things were as they appeared, that this was really a workers' State and that the entire bourgeoisie had either fled, been killed, or voluntarily come over to the workers' side; I did not realize that great numbers of well-to-do bourgeois were simply lying low and disguising themselves as proletarians for the time being.”

So, Orwell thought that not only could Socialism work but it that it was already working in Barcelona during that time, however brief.

In Orwell's earlier life he had argued that wealthy Britain was only able to exist thanks to coal miners working themselves to early deaths in underground infernos. They were the true creators of that nation’s wealth.

As William Blake outlined, the entire modern world is "underwritten by constant, speechless suffering and that "culture" begins in the callused hands of exhausted children," [to quote historian, RobertHughes.]

It all reminds me of a line in a song by another Australian expat, NickCave:

"Out of sorrow, entire worlds have been built."

Posted by Brett Hetherington at 12:29 AM 2 comments: Links to this post

"My name change saved my life." - The last British soldier to fight Franco dies at age 94 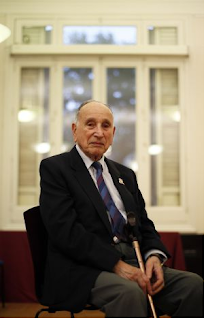 On his 18th birthday David Lomon (real name David Solomon) left the UK to join the Republicans in the fight against Franco.

"They advised me to change my last name to one less Jewish because to go fight the fascists, if I had the misfortune to be caught, it could help me to survive," he wrote in a memoir only a month ago.

After the Battle of the Ebro, Solomon was captured by Italian troops and sent to a POW camp in Palencia, mostly populated by the international brigade [of which George Orwell was also a member.]

"The Gestapo came every few weeks to take German citizens and especially Jews away. My name change saved my life. "

As a result of his altered name Solomon was put on a list of prisoners for exchange and release. He then went on to have a very long life, dying only last week.

Solomon was one of the few international brigades still alive, and the last of the British. In total, there were 35,000 “brigadistas internacionales” who came from 55 countries and  from a wide range of jobs including miners, lawyers and even leftist politicians such [German] Willy Brandt.

When Solomon first left home he believed that Spain would win the war.

"We were good," he recalled with a smile. But once here he discovered that it was in fact the weaker side he had chosen.

"We had to make do with old weapons, mostly from before the [first world] war and with old Russian machine guns. The food was not much better: donkey-meat, sardines and beans were our staple diet. But we were so determined to overcome all the difficulties that we just accepted what they gave us and we carried on. After all, we had not come to Spain to eat, but to fight. "

Solomon was impressed by the Spanish: "I was fascinated to see people so poor and yet so proud," he said.

He fought in the Battle of Teruel and the Aragon offensive against Franco. A bomb just about killed him and the explosion left him unconscious for no telling how long. When he woke up, he realised he was a prisoner in a truck guarded by the Italian division of Blue Arrows. It was March 1938.

He and others were taken to the former monastery of San Pedro de Cardena. Crammed in the basement, many of his comrades died from a lack of medical care and food.

"It was awful. When you get into a place like that it’s as if you have left the world, "he recollected.


Solomon was proud of the Spanish passport he obtained due to to the ‘law of historical memory’ which granted citizenship to those from the International Brigades. Losing the Civil War was "a blow" for him but he claimed that it also served as an "inspiration" because when he returned to England, after being swapped for four prisoners Italians, he joined the Army and fought against Hitler after.

"We won that war" he stated.

A month ago he came to Madrid (for the final time as he was) invited by the Friends of the International Brigades to participate in events for the 76th anniversary of the defense of the capital city.

Almudena Cros, from that association, recalled how he walked "with admirable verve" along the same streets that he had marched in…76 years ago when he first joined the XI International Brigade.

[My translation from an article by Alvaro Garcia in El Pais.]

Posted by Brett Hetherington at 12:42 PM No comments: Links to this post


This week I’ve been doing some work on language with a few of the bright young things from Barcelona Supercomputing Centre (BSC.)

It’s easy to get preoccupied with all the daily bad news around but they are doing some incredible things right here in this city.

Using MareNostrum, one of the world’s largest and most powerful super-computers, BSC have recently sequenced the tomato gene and played an important part in striving to improve the half-life of transplanted human livers.

They have also created a model “computational heart” which they named Alya Red. The video they produced won two international awards this year and can be seen below…

BSC rightly called our hearts “the most perfect pump that millions of years of evolution have created.”

Posted by Brett Hetherington at 9:54 AM No comments: Links to this post