"Spanish society has got an outstanding debt with its young people, who can’t construct a personal and professional life..., who don’t have decent jobs and salaries, don’t have adequate housing and can’t start a family.

The last decade has been witness to how the concept of “mileurista” [somebody earning 1,000 € a month] has passed from being derogatory to being an aspiration.

A recent study by [the trade union organization] Comisiones Obreras with the title “#GeneraciónMóvil” [mobile generation], shows the following: unstable and unpredictable personal and career paths, always conditioned by low salaries, unbearable rates of temporality and a rotation that turns the young into nomads in the labor market: from one sector to another, from salaried to self-employed, from victims of undesired partiality to false interns, with imposed stopovers in unemployment or abroad, without safe horizons nor the least capacity to plan life projects in the medium or long term, without security...
In 2017, 66 of every 100 young people had a temporary and/or part time contract; and still worse, 20 of every 100 salaried young suffered from double precariousness (temporary and part-time contract). Only 34 of every 100 had a fixed full-time contract...
Lastly, emancipation: 81% of the young between 20 and 24 years, 53% of those between 25 and 29, and 24% of those between 30 and 34 years still live with their parents. … leading to a lower birth rate, as they have their first child later or can’t afford to have children at all.
[…] many young people are deprived of the opportunities they should have had: the right to live their own life independently has been snatched away from them, to take their own choices, forcing them to accept, in the best of cases, any job, to work at any price, to study what the job market dictates to them and not that for which they had a vocation, or to return again and again to their family’s home, hiding their frustration."
SOURCE: Joaquín Estefanía's article: “Ideas,” El País, Dec. 30, 2018, p. 8 [printed edition] (Originally found as excerpts here at LITERARY RAMBLES blog.)

Posted by Brett Hetherington at 11:26 PM No comments: Links to this post

"The ruling class that drove Brexit"

"The media loves to blame far right movements and moments on the working class. Our Brexit research tells a very different story...


After Trump’s election, millions of words were typed about how ‘blue collar’ areas had turned out to vote Republican. Yet Clinton led by 11% among voters who earn less than $50,000. Trump secured his victory by winning among those who earn $50-200,000.
Much the same can be said for the far right in Italy, whose core support is in the wealthier – though now de-industrialising – north, rather than in the more impoverished south; or about Brazil, where 97% of the richest areas voted for the fascist Bolsonaro, whilst 98% of the poorest neighbourhoods voted for the Workers’ Party candidate, Haddad.
We see a similar distortion in debate about Brexit.
After the vote, journalists went on endless tours of deprived areas to report on how working-class people voted Leave (which many did).
However, they somehow forgot to mention that wealthy counties like Wiltshire backed Brexit, while some of the poorest areas of the UK – the western parts of Wales, Scotland and Northern Ireland, as well as Liverpool and Leicester – voted Remain.
Academics who studied the class breakdown of the Brexit vote found ‘the Leave vote to be associated with middle class identification and the more neutral “no class” identification. But we find no evidence of a link with working class identification.’
This is nothing new. Ruling classes have always sought to blame bigotry on the working classes. Too often in recent times, the liberal media have been willing to champion this myth, rather than confronting the prejudice in its own ranks.
The way we talk about social media is central to narratives that blame the oppressed for their own oppression.
Online bigotry, abuse and trolling are often framed as problems of the unwashed masses, who need to be regulated by ‘benign’ institutions such as global data corporations or the police.
In reality, whilst racism, Islamophobia, misogyny, anti-immigrant hysteria and other forms of bigotry feature up and down the social spectrum, their recent mobilization is part of a different story. It has been led and co-ordinated by elite networks, seeking to reshape the world at the dusk of neoliberalism.
And they are often in direct collaboration with these supposedly respectable institutions, from Facebook to the FBI.
To put it another way: the decade since the financial crisis has accelerated the emergence of a new global oligarch class. With growing wealth has come growing power and a growing ability to shape political debate through the dominant communications technology of the era: TV and the internet.
As has long happened with right-wing movements, they have done so in close collaboration with military and security networks. Because the era is neoliberalism, those networks are largely privatised, made up of mercenary firms with names like Palantir, Arcanum, SCL, AggregateIQ and Cambridge Analytica.

Take, for example, the Brexit referendum in the UK. The Leave movement operated a bit like a solar system, whose two largest planets were surrounded by a collection of moons. First, there was Vote Leave, the official Brexit campaign, fronted by Conservative politicians Boris Johnson and Michael Gove, and orbited by numerous other campaigns and front groups.
Second was Leave.EU, associated with the further-right UK Independence Party, fronted by iconic blazered bigot Nigel Farage and primarily funded by an insurance man called Arron Banks. (Banks, by my sums, claims to have funnelled about £15m into the group and its various moons...)
READ MORE in detail from source at openDemocracyUK here.

Posted by Brett Hetherington at 11:57 PM No comments: Links to this post

"The author's mouthpiece" -- My latest review for Catalonia Today magazine 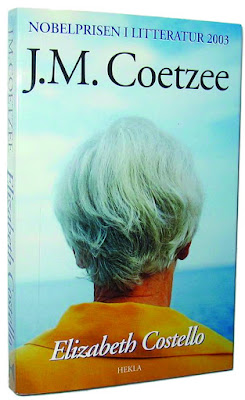 Elizabeth Costello is that very rare thing: a commercially successful writer of fiction from Australia – the far end of the world that has typically given very little attention (or much else) to people who use words for their living and plenty of attention to those who are professionals in sports or make big bucks some other way.


It’d be an exaggeration to say that someone like this author would have to be invented in fiction because she simply couldn’t exist in real Australian life, but this is almost a forgivable exaggeration, given the interests of the populace there in mainly competitive activities.
Being in the creative fields in Australia is often a bit like being labelled as a poser. In that wide, brown land the word “intellectual” is sometimes used as a type of insult.

At one point in JM Coetzee’s novel, Costello apologises to her audience: “I usually take care to conceal the extravagances of the imagination.”
Costello though, as the author sets her out at least, is as good as a polemicist in the public lectures where she is invited to speak.
Within a few paragraphs of her first long monologue about the philosophy of vegetarianism, I wondered whether I was actually listening to Coetzee’s real opinions because the arguments the character makes are so heartfelt. (A glimpse at the Acknowledgments section placed on the final page confirms that several of the chapters called “Lessons” were in fact published as non-fiction previously).
Later in the book, after Costello publicly compares abattoirs with the Nazi’s murder camps, we read variations on the first meat-free-living theme. “A sparrow knocked off a branch by a slingshot [or] a city annihilated from the air: who dare say which is worse?” a narrator asks on Costello’s behalf.

Even the smell of a boiled egg “nauseates her” and this extreme Buddhist-like respect for the sacredness of all life swings between wholly convincing and repetitive ranting. It takes up large parts of the book, as does a dry examination of Greek myths.
In one of the most moving sections though, Costello talks about what she ultimately believes in when she has to justify herself. In lovely images she explains where frogs live during Australia’s long dry spells.

Oddly, it is here that she seems to be speaking for the writer in general, saying this “is a story I present transparently, without disguise.”
The book is lifted and somewhat lightened by the contents of a letter that Costello writes to her sister, who is a nun. In a surprisingly erotic scene, she tells of her lack of inhibition and displays of “humanity” one afternoon in her younger years.
Religion plays a key part in the book and a clever analysis of “The Virgin” Mary is a highlight. Costello ultimately has a strange belief in the devil but not in god and this forms a counterbalance with her sister and another author she battles with.
I also speculated about the possibility of Costello having been modelled on the great writer, VS Naipaul, clearly also a real arrogant doo-dah and a highly selective eater but undoubtedly deserving of his Nobel Prize for titles such as “A House for Mr Biswas”. Costello is best known for her novel “The House on Eccles Street”.
JM Coetzee’s semi-autobiographical “Boyhood” is a tighter, more consistent book than “Elizabeth Costello” but this book about a strong-minded woman is still certainly worth a read.

(This article was first published in Catalonia Today magazine, January 2019.)

Posted by Brett Hetherington at 9:59 PM No comments: Links to this post 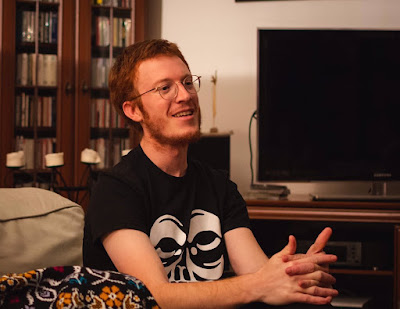 "A Belgian-Canadian university student and DiEM25 member is facing up to eight years of jail-time after being arrested during a spontaneous protest in front of the Hungarian Parliament on the evening of December 12.


Adrien Beauduin, a PhD student in Gender Studies at Central European University, was arrested along with four other protesters, who are all being charged with collective assault on a public official. Police charges allege that all five who were arrested, including Beauduin, used their left arm to strike a police officer and then kicked in the direction of a police officer.
According to videos and photos from the event, as well as witnesses present, Beauduin did not attack any police officers. Available video footage of the demonstration shows him standing calmly before being swept up when police charged the crowd.
“I am being charged with a very serious crime that I did not commit,” says Beauduin. “I am afraid for my future and the future of my fellow protestors.”
If found guilty of the police charges Beauduin will face a prison sentence ranging from a minimum of two years to a maximum of eight years."
Read more from source (and donate to help) here.
Posted by Brett Hetherington at 10:55 PM No comments: Links to this post