"The pioneering Spanish company where staff work a 4-day week" 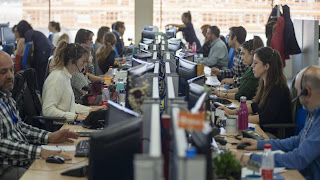 "A 4-day week on the same salary has become a reality in Spain at Software Delsol in the southern Spanish city of Jaén...

When it was implemented at Microsoft in Japan, sales increased by 40%.

The company believes that a shorter week leads to less absenteeism and greater staff loyalty while attracting an unparalleled pool of talent...

Established 26 years ago and located in the Geolit Science and Technology Park, the company’s headquarters are designed with both leisure and productivity in mind; more formal customer service zones combine with areas for informal meetings and sofas to relax on, not to mention the gym, paddle tennis court and outdoor pool.

Staff also enjoy free lunches and the company offers scholarships, health insurance and the possibility of working from home as one employee does from Bordeaux, all of which improves the work-life balance."

In addition, the company guarantees a salary hike of over 3% each year –3.2% this year – another unprecedented working condition in Spain’s labor landscape."

Posted by Brett Hetherington at 9:10 AM No comments: Links to this post

Can horses feel shame? Do deer grieve for their dead? Why do roosters deceive hens?

What about humpback whales that act as if they’re grateful, adulterous magpies or pigs that have learnt their own names?


These are the kinds of questions that are asked by people who spend lots of time around animals because our life experiences are full of stories that seem to support an obvious ‘Yes’ answer.

In Peter Wohlleben’s book, “The Inner Life of Animals” -- translated with warmth and clarity by Jane Billinghurst -- we get as close as (currently) possible to understanding how the creatures we share the planet with are much more complex than we might at first think.

With our inbuilt tendency to ‘humanise’ animal behaviour, we like to compare them with our own species but this book has a remarkable way of putting us into their minds, bodies and hearts.

Some of these are the author’s own pets and farm animals and his lifetime’s sharp observations of them bring the reader genuine insight.

The other great strength of this book is also one of it’s few weaknesses. We are moved and educated in equal measure with page after page of compelling anecdotes about the uplifting and even empathetic side of animals (squirrels adopting orphans and even cross-species pseudo-families) but there is only featherweight attention given to the cruelty that also runs through the animal world.

Where, for example is the fox that only eats the fatty jowls and throat of the sheep and leaves it to die in slow agony with the rest of its body intact?

If we humans are merely animals (and this is a biological fact of evolution that Wohlleben rightly points out) then surely the cruelty we routinely practice can also be found in our four-legged relatives too.

Wohlleben tells us with loving, enthusiastic praise about the crow that goes tobogganing for fun. He overlooks the cat that tortures and toys with the mouse for nothing but amusement. The book would be stronger if this was acknowledged because it would add a few fistfuls of balance.

Where the book also charms the reader is in overthrowing misconceptions we generally have. Fish have no memory? Pigeons are “bird-brained” or pigs are simpletons? After reading this work, your mind is very likely to have been changed for good on these and similar questions.

He also counters other popular notions by illustrating that ‘the law of the jungle” and “survival of the fittest” are only parts of how animals relate with each other.

Organised cooperation amongst individuals and groups is surprisingly common and it seems that many creatures (such as red deer) have the ability to switch off their hunger impulses when the seasons dictate this.

When it comes to domesticated animals though, in a brave and convincing section, Wohlleben also shows that some animals undoubtedly enjoy their work with men and women.

He writes about horses happily clear forests as well as shepherd dogs engaged in keen “partnership” with their owners. This is only after stating of course, that “most animals used by people lead dismal lives.”

Before now running his own home farm, the author worked in forestry commission woodland for 20 years and he has also written a book about the hidden life of trees.

Reading that might even persuade me to stop using paper.

[This book review was first published under the title ""Animal feelings" in Catalonia Today magazine, January 2020.]

Posted by Brett Hetherington at 12:05 AM No comments: Links to this post 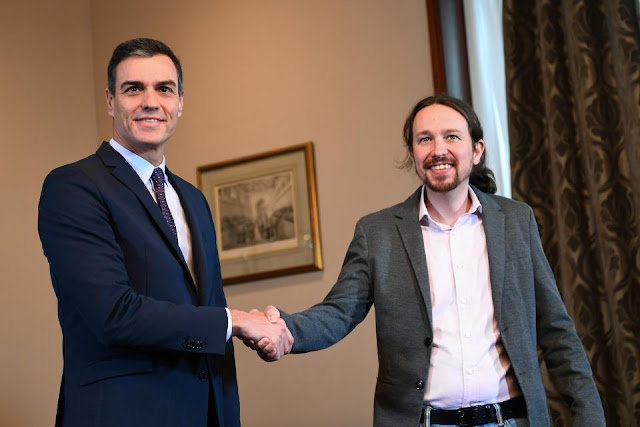 A 19 year-old friend of my son's was crying with relief and happiness when he found out about the new government plans for welfare the other day.

It's difficult to know how progressive the new left coalition will be, given the Socialist party's previous move to the right but there are some encouraging signs already...

"Today Spain elected its first left-wing coalition since the civil war in the 1930s. Already, it is under siege from the country's elite - but if it succeeds, it can improve the lives of millions...


Before last weekend, it had been decades since the Spanish parliament had seen such a powerful challenge to the rhetoric of “defending the homeland.” Countering the rising politics of nationalism, Podemos leader Pablo Iglesias told a heated Congress that the real “betrayal” of Spain was “attacking workers’ rights, selling off public housing to vulture funds, and privatising the welfare state and public services.”
For the far-right forces whom Iglesias was addressing, he and his allies were simply a band of “communists, populists” and regional nationalists run amok. In the view of Spanish-nationalist parties like Vox, the Podemos leader is figurehead of an “anti-Spanish” rabble, entertained by a power-hungry “sociopath” in the form of Prime Minister Pedro Sánchez.
At the heart of this debate was the prospect of a historic coalition agreement between Sánchez’s centre-left Socialist Party (PSOE) and Iglesias’s Unidas Podemos — on January 7 sworn in as Spain’s new government. Supported by Catalan and Basque regionalists, along with a mishmash of independents, after years of false starts the two parties are finally forming what they call a “progressive coalition” — for its critics, a “Frankenstein’s government.”
Such an arrangement is long overdue, after a decade of post-crash austerity and Spain’s most serious constitutional crisis since the 1970s transition to democracy. Since Podemos smashed open the two-party system almost five years ago, no such coalition with the PSOE has proven possible, even when the parliamentary arithmetic allowed it.
Yet all this changed with the November 2019 general election. As the left-wing parties dropped some 1.5 million votes (with the PSOE itself losing 800,000) Sánchez found himself unable to make a deal to his right, and was finally forced to commit to the “progressive” agenda he had hitherto only gestured toward.
After the previous general election in April 2019, the long summer of coalition talks between the PSOE and Podemos were polarised and often conducted in bad faith by Sánchez’s party. Yet November’s electoral setbacks for both the PSOE and Podemos — in a climate of rising nationalist tensions, fed by the Catalan issue — instead rapidly drew them into a coalition.
In a period of retreat for the European left, this government will arguably constitute the most left-wing administration across the entire continent. Yet, beyond its lack of international allies, this administration will also be forced to work within the challenging confines imposed by Spain’s constitutional crisis, EU budget rules, and the virulent opposition not only of the Right but also Spain’s major economic and media powers.
For years, these same forces have succeeded in blocking a PSOE-Podemos coalition. Today, we can be sure they will waste little time in looking to neutralise — if not do away entirely — with this government and its paper-thin majority.
Yet despite the clear challenges that lie ahead, there are also positive signs. This administration will also see Pablo Iglesias’s formation assume cabinet positions — the government posts it has long believed necessary if it is to hold the flip-flopping PSOE to its promises of social reform and democratic renewal.
Beyond Iglesias’s own appointment as Deputy Prime Minister, there will also be substantial portfolios for Podemos’s Yolanda Díaz as Labor Minister and Irene Montero as Minister for Equality. Izquierda Unida (United Left) leader Alberto Garzón will be its Consumer Minister — the country’s first Communist minister in over eighty years. This weekend it was also announced that renowned sociologist and social-movement theorist Manuel Castells will become the fledgling government’s Universities Minister, after being put forward for the role by Podemos’s Catalan affiliate, En Comú Podem.
Read more from source here

Posted by Brett Hetherington at 9:16 AM No comments: Links to this post

"Human civilisation as we know it may have already entered its last decades, a worrying new report examining the likely future of our planet’s habitability warns.

The increasingly disastrous impacts of the climate crisis, coupled with inaction to tackle it are sending our planet down a bleak path towards an increasingly chaotic world which could overwhelm societies around the globe, the report’s authors contend.
The paper, produced by the Melbourne-based think tank the Breakthrough National Centre for Climate Restoration, is presented by the former chief of the Australian Defence Forces and retired Royal Australian Navy Admiral Chris Barrie."
Read more from source here.

Posted by Brett Hetherington at 12:41 PM No comments: Links to this post

"In less than three weeks, board game lovers in France bought all 10,000 copies of Kapital, a new game about class struggle, injustice and French politics created by a married couple of French sociologists.


A mixture of Monopoly and Game of the Goose, Kapital “seeks to make people understand the notion of wealth” as they battle their way through the game’s 82 boxes (the average life expectancy of a French person) leading to the almighty Tax Haven.
Not only do the wealthy have money, they also have social, symbolic and cultural capital. Just as in real life, the dominant players have the best chance of winning."
Read more from source here.

Posted by Brett Hetherington at 7:49 AM No comments: Links to this post