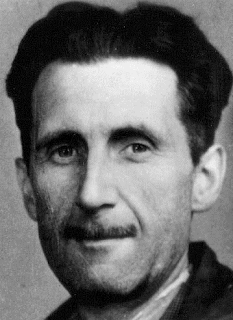 "In the clear yet cold winter of 1936-1937 a 33-year-old George Orwell found himself fighting on the Republican side in the Spanish Civil War.  He was to vividly record his experiences in Homage to Catalonia, one of the first-rate nonfictional books on the brutality of war.

Now, with almost 50% of Catalans in favor breaking away from Spain, Spaniards are facing a possible fracturing of their country.  Absurd? Impossible? Illegal? Unconstitutional?  Well, Orwell had never imagined that the Barcelona he admired, where “the working class was in the saddle,” and where “there was a belief in the revolution and the future,” was to have “lies and rumors circulating everywhere, the posters screaming from the hoardings that I and everyone like me was a Fascist spy” in less than six months’ time.
No one is predicting that in today’s Spain fellow countrymen will be killing each other, and the Minister of Defense has said that Spanish military involvement will be unnecessary as long as everybody “fulfills their duty.”  But there are several salient historical and political parallels between what Orwell experienced in the Spanish Civil War and the current independence movement in Catalonia."

Read more from source at El Pais in English here.
Posted by Brett Hetherington at 12:19 AM No comments: Links to this post

"Germany puts refugees to work ... for one euro [an hour]" 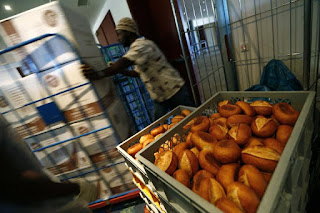 "With a spoon and spatula in hand, Zaid, a 23-year-old Iraqi refugee, lifts the lid on a large pot filled with goulash and potatoes as he begins his shift.

From 6:30 to 8 pm, he is employed by the city of Berlin to dish out dinner to 152 other Syrian, Iraqi, Afghan and Moldovan refugees in a sports hall, which had been turned into an emergency shelter for the newcomers.

Zaid is one of thousands of refugees who have taken on tasks ranging from repairing bicycles to pruning plants to cleaning sidewalks for pay of just over one euro ($1.1) an hour.

The so-called "one-euro jobs" have been touted as a springboard for the newcomers into Germany's job market, but experts remain skeptical about their effectiveness.

At the sports gym, Zaid tries to explain to the sceptical faces crowded in front of him what went into the beef stew that he described as "so German."

For the work that includes setting the table, cutting bread, serving food and then cleaning up, he is paid 1.05 euros an hour.

Restricted to working no more than 20 hours a week, Zaid gets a monthly income of 84 euros at best, a small extra on top of the 143 euros he receives as pocket money while he waits for the official decision on his asylum application."

Read more from source at GlobalPost here.
Posted by Brett Hetherington at 11:18 AM No comments: Links to this post 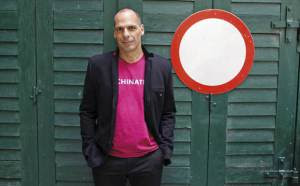 Staring into the camera he told the Spanish people watching at home: “This is what you get by voting for parties like Syriza.”

The crushing of the Athens Spring, together with the soothing fairytale of Spain’s economic “recovery,” was meant to stem the rise of Podemos (a.k.a Spain’s answer to Syriza) and to lead Rajoy to a general election victory in December 2015. Alas, voters had other ideas, denying Rajoy a working majority, giving Podemos a larger share than the pollsters had predicted, and producing a hung parliament.

Since then, frantic negotiations between Rajoy’s People’s Party, the fading Socialists led by Pedro Sanchez, the newfangled neoliberal Citizens’ party and Podemos have failed to produce a coalition government, triggering a fresh general election. The new contest’s outcome will hinge on whether Podemos manages to rise from third to second place, pushing the Socialists into a fate similar to that suffered by the Greek socialists (PASOK) and awaiting the French socialists next year.

If Podemos fails, a grand coalition of the establishment parties, possibly with the addition of the Citizens’ party, is on the cards. But if Podemos manages to shrug off Syriza’s humiliation and overcome Rajoy’s fear mongering to become the second largest party, another hung parliament will spell the end of the two-party system. This will yield a Madrid government inimical to the troika and the ironclad majority that the German Finance Minister Wolfgang Schäuble has surrounded himself with in the Eurogroup.

Such a development would spell trouble for Europe’s frazzled establishment which, for this reason, is now trying to rush through a new Greek austerity package before the end of May. The hope is to trap Athens into permanent debt bondage before the Spanish voters deliver a verdict likely to alter the balance of power within the Eurogroup.

But will Podemos manage to overtake the Socialists?"

Read more here.
Posted by Brett Hetherington at 1:43 AM No comments: Links to this post

Refugees Aid march from Barcelona's Placa Catalunya this Saturday, May 14

Posted by Brett Hetherington at 11:13 AM No comments: Links to this post

"East of interest" - My latest article for Catalonia Today magazine


How little we know about the culture of that 'area of darkness:' Eastern Europe.
Living within a few hundred kilometres of this region, most of us would be hard pressed to give the names of more than a handful of directors, actors or music groups from somewhere as close as the Czech Republic or even from the former East Germany. Communism blotted out an entire world of creative expression to those who lived in the so-called free West of Europe and tastes in cultural fashion have hardly reclaimed any of it.
Reading Polish writer Agata Pyzik's recent ironically titled book "Poor But Sexy" helps to uncover some of what she calls the 'culture clashes' between the two sides of the continent.
She argues that twenty five years after the fall of the Berlin Wall, Europe is as divided as ever. Only occasionally using too much post-modernist academic jargon, she makes the highly convincing case that the Western 'democratic' world has maintained an arrogant assumption that everybody wants to 'buy into' their capitalist belief systems. As well as this, she acknowledges that conservative political failures (including missed opportunities on the left) have meant that market forces and greed have also triumphed over social or collective responsibility in the East, just they clearly have triumphed in the West.
But what Pyzik also does is give the reader a new insight into the arts in a part of the planet when all creative action had a political edge to it. Russian films of the post-war era obviously had a propagandist purpose (very often) but the Sots Art movement also got away with mocking 'unberaable, ritualised Soviet life' while simultaneously showing how the average person could attempt a normal existence among the ruins of the old world.
As well as this, writers such as György Lukács used a kind of Brecht-like critical realism to 'inspire and activate the reader.' In his earlier book "Man Without Qualities" - a superb title - he largely rejects modernity, seeing 'the tragedy of the modern artist as someone who lost the ground under their feet.' Surprisingly, he views this as 'an advance rather than a difficulty.'
Again and again in Eastern Bloc culture Pyzik points out examples of the contradictions and paradoxes of the kind that seem to me to be a big part of French thinking but are so often overly simplified into the black-and-white certainties of Iberian habits of mind.
Another strength of this book is that it recognises the unheralded contribution of women in the East.
It took the feminist film director Agnieska to accurately predict how female activism in Poland's Solidarity movement would be wiped from popular memory and when this is combined with how sexuality was restricted and banned in the movies across Communist nations, it is alarming how the idea of feminine purity was so dominant. In a patriarchal Catholic Poland 'full of open sexism' precious few women characters of equality got through to be seen.
And in this book there are countless references to the culture from the West so that we are not lost in unfamiliar names. Everyone from David Bowie to Ken Loach to Art of Noise gets a mention. There are plenty of relevant comparisons with contemporary Eastern culture, Pyzik finds. She ends with the disturbing statement that the populace of Eastern Europe "so strongly believe we don't deserve the normal conditions of a social democracy that we hardly fight for it." Let's not make that same mistake in other parts of the planet.


[This article was first published in Catalonia Today magazine, May 2016.]
Posted by Brett Hetherington at 10:35 AM No comments: Links to this post