How the economic "crisis" kills

On Monday morning a woman committed suicide in the Madrid suburb of Carabanchel, after receiving an eviction notice.

She was only the most recent victim of a problem that psychologists have been warning about for several years : mental disorders caused by the crisis, mainly due to a rapid increase in unemployment, ending up raising suicide rates.

But, even though there have been numerous studies linking mental disorders and economic crisis there had been no fully-conclusive evidence of it.

The crisis has made the suicide rate increase markedly around the world.

A new study published in the British Medical Journal this week says that in 2009, the year after the start of the global economic crisis, the overall suicide rate among men rose by 3.3 %, an increase of approximately 5,000 self-inflicted deaths in all countries analyzed in respect to the expected trend. 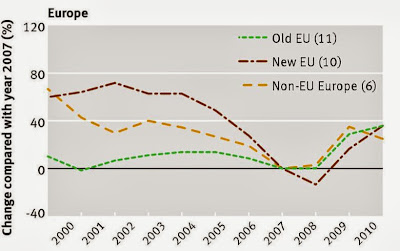 In Spain, suicides increased by 7.2% more than expected, but only among men, one of the authors of the study, professor of epidemiology at the University of Bristol, David Gunnell confirms.

In the 20 European countries that already have data for 2010, the analysis indicates an even greater increase in male suicide: 10.8 % more than in 2009.

Researchers from the University of Hong Kong , Oxford and Bristol, found that the evidence suggests that the increase in the number of deaths was observed mainly in the 27 European countries studied (up 4.2%) and in 18 countries in the Americas (6.4%) .

They further stress that their findings are "probably an underestimate of the true impact of the global economic crisis on suicide " because some countries data was not yet available.

In fact , in the 20 European states that already have information on 2010, his analysis indicates an even greater increase in male suicide, 10.8% more than in 2009.

The increase in the suicide rate is particularly high among men in countries where the level of pre-crisis unemployment in 2007 was relatively low (in Spain it was at 8.26% ) .

According to the researchers, this is explained by "the economic crisis and rising unemployment causing more fear and anxiety...and stigma...in countries where unemployment was low, which in turn has resulted in increased suicides."

For scientists, an increase in the suicide rate is usually the tip of the iceberg of emotional distress related to the recession. According to statistics, for every person who takes his own life, about 30-40 try to, and for every attempted suicide a dozen people experience suicidal thoughts.

The impact of the economic crisis on the mental health of the Spanish was investigated by a team of scientists from the University of the Balearic Islands, led by Dr. Margalida Gili.

They published their findings last year in the European Journal of Public Health. According to them, between 2006 and 2010, mental disorders (as seen by primary care physicians) grew significantly. In this period diagnoses of depression increased by 19.4 %, anxiety was up 8.4 % and there was a 4.6 % jump in alcoholism.

The government's austerity policy is causing further loss of jobs, and increasing the risk of suicide, the authors of the study found, but they are cautiously hopeful and insist that this problem has a solution:

"Our findings show that the economic crisis causes a significant increase in suicides, but previous research shows that this risk is not inevitable. Programs to boost the labor market may help offset the impact of the recession on suicide levels, since a successful relocation of the unemployed significantly reduces or eliminates risks to mental health on the unemployment. In times of cuts, countries with limited resources can focus their aid on young men of working age. In many countries, however, government austerity is causing further loss of jobs, which will increase the risk of suicide. Urgent action is needed before the economic crisis causes a further increase in suicides.

My translation from original source here.

Posted by Brett Hetherington at 4:30 AM