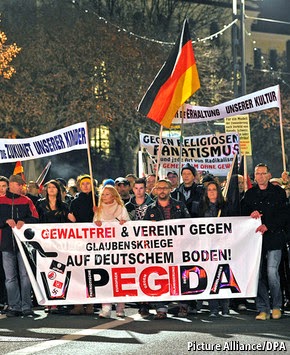 "Calling themselves Pegida, or “patriotic Europeans against the Islamisation of the Occident”, since October they have marched through Dresden every Monday. Their numbers are growing: on December 15th 15,000 protested. Their slogans of xenophobic paranoia (“No sharia in Europe!”) seem bizarre in Saxony, where only 2% of the population is foreign and fewer than 1% are Muslim.
The marchers make no attempt to explain their demands. Convinced of a conspiracy of political correctness, they do not speak to the press. Few bear any signs of neo-Nazism. They have eschewed violence. What they share is broad anxiety about asylum-seekers (200,000 in 2014) and immigrants."

Posted by Brett Hetherington at 9:52 AM