Stealing food for need and as a social protest 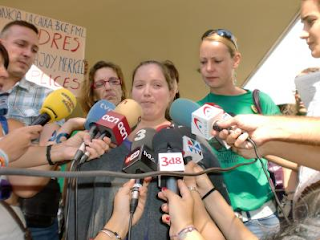 Last week in Vilafranca an unemployed woman named Marian Fernández was fined 90 Euros for unlawfully taking 241 Euros worth of “essentials” from a Maxi Dia supermarket.

She was there as part of a group called ‘PAH’ - people affected by mortgage problems who went there to make a statement about not being able to afford life’s’ necessities.

Ms Fernández, a mother of three children and having no present income, had  apparently presented a credit card with a zero balance at the checkout.

This action follows from a similar act last month by JuanManuel Sánchez Gordillo, a mayor in Andalucia who also stole food but with the plan of passing it on to others who could not afford to buy their own.
Posted by Brett Hetherington at 1:45 AM