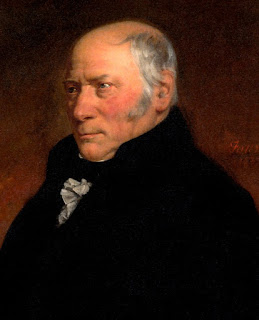 This story begins in the late 18th century with a small boy’s limitless curiosity, at first for staring at his marbles and stones, but soon this grows into a thirst for knowing what lies deep beneath the British countryside around him.


William Smith was unusual for many reasons. As a self-taught young man he traveled a great deal further than most parochial males from farms and this helped to fire his fascination with the natural world.
Unlike almost all “well-learned” professionals of his day, he also had no distaste about repeatedly climbing down into dark, dangerous coal mines.
Here, he was one of the first to study and report on that black mineral where it actually lay. Of course, it was coal and it was coal miners who were largely responsible for the Industrial Revolution that was then raising Britain’s status to that of an empire-building superpower.
One of the major founding fathers of geology, Smith went on to cover about 10,000 miles a year on foot, on horse and by carriage, cataloguing the locations of all the rock and fossil formations that are to be found in the UK.
Over 14 long years, he also laboriously produced a giant hand-coloured map that showed exactly where the strata of rocks could be found under the earth. Nobody had done anything of the sort before in such a comprehensive and systematic way and two centuries later this sublime masterwork is still accurate and relevant.
World-changing map
In his book titled “The Map that Changed the World” Simon Winchester makes the valuable point that Smith’s “lonely and potentially soul-destroying project” was done, at this time in our history, “in a wholly unknown area of imaginative deduction; there were no teachers, no guidebooks.”
As well as these limitations, Smith could have looked around and noticed that even scientists were convinced, for example, that “mountains grew like trees, organically, upwards and outwards,” all apparently from god’s design.
Smith played a major part in the grinding process where religious and other superstitious beliefs were slowly being cast off (just as we today are [hopefully] living in an era where stupidity related to gender, race or sexual and national prejudices are finally starting to die.)
For most of his career Smith was also an expert in the crucial programme of canal building, but he was in fact snubbed by the main organisation or ‘society’ of his profession as a geologist.
His working-class family background meant that a couple of the ‘perfumed’ snobs who ran and financed what was in truth little more than a gentlemen’s club could steal his ideas and claim them as their own. Largely as a result of this, Smith was to spend time in a debtors prison in London. He was to write with understandable bitterness that “the theory of geology is in the possession of one class of men [and] the practise in another.”
William Smith clearly deserves a much greater and more prominent place in the collective memory of science’s leading men and women. His name merits being up there with the likes of Charles Darwin, Albert Einstein or Richard Dawkins.

[This article was first published in Catalonia Today magazine, November 2017.]

Posted by Brett Hetherington at 1:04 AM