"How to Lose a Country, in 7 Steps -- A Conversation with Ece Temelkuran" 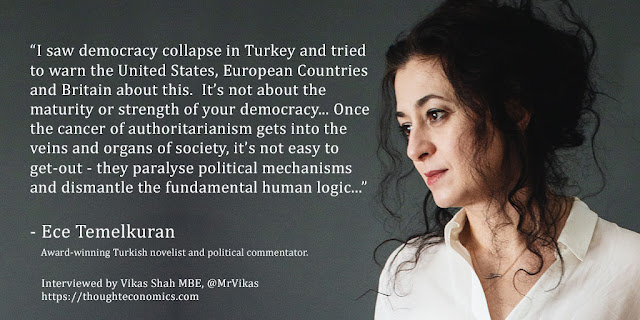 " “I am one of the early birds…” Ece Temelkuran told me, “I saw democracy collapse in Turkey and tried to warn the United States, European Countries and Britain about this.

I’ve been telling people that what you think is normal, or a passing phase, is part of a bigger phenomenon that affects us all.  Somehow though, European democracies feel they’re exceptional – and too mature to be affected by neofascist currents.”


Ece has seen this all before.  In her incredible 2019 book How to Lose a Country: The 7 Steps from Democracy to Dictatorship, she notes, “We have learned over time that coups in Turkey end the same way regardless of who initiated them.
It’s like the rueful quote from the former England footballer turned TV pundit Gary Lineker, that football is a simple game played for 120 minutes, and at the end the Germans win on penalties. In Turkey, coups are played out over forty-eight-hour curfews, and the leftists are locked up at the end. Then afterwards, of course, another generation of progressives is rooted out, leaving the country’s soul even more barren than it was before.”
Ece Temelkuran is an award-winning Turkish novelist and political commentator, whose journalism has appeared in the Guardian, New York Times, New Statesman, Frankfurter Allgemeine and Der Spiegel. She has been twice recognised as Turkey’s most-read political columnist, and twice rated as one of the ten most influential people in social media (with three million twitter followers). In this exclusive interview, we discuss the dangers of populism, authoritarianism and fascism, and why we need to act now.
Q: What are populism and nationalism?
[Ece Temelkuran]:  Today, there is less time to understand the differences between nationalism, populism and authoritarianism.  In Britain, democracy is literally crumbling at the hands of a strange guy with funny hair!  People simply aren’t recognising the dangers that lay ahead, so there’s not enough time to get into definitions
One truth is that you cannot really know what populism is until you experience it.  Populism is the act of politicising and mobilising ignorance to the point of political and moral insanity.  Nationalism as we know, comes from the phenomena of nation-states – and it’s quite ironic therefore that we are now talking more and more about the failure of nation states and the failure of supranational and international institutions as well… and meanwhile neo-nationalism is on the rise." "
Read more from source here.

Posted by Brett Hetherington at 12:23 AM