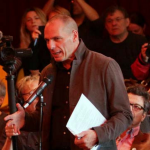 Ultra-conservatives will always do what their natures demand.

Given any opportunity, they strangle democracy while at the same time claiming that it is democracy that they want to breathe life into.
The horrifying repression in Catalonia is an extreme illustration of this and makes a perfect example of right wing crimes against humanity but it is certainly not the only current case of the most privileged in society making sure they stay in complete control.
Over the border in France, President Emmanuel Macron (the man whose election held off a far-right National Front victory) brought down his first budget.

He handed a huge €7 billion tax cut to the wealthy and slashed social spending which included robbing €1.7 billion from housing aid and the elimination of 120,000 state-funded short-term job contracts.
In Italy, three time Prime Minister and convicted tax fraud billionaire Silvio Berlusconi is gone but the forces he represented are still alive and kicking hard. In Sicily -- as with much of the country -- a rightist alliance has had considerable electoral success blaming their economic problems and high unemployment on immigrants.
Of course it is actually the policy of continuing austerity which allows precious investment to go into speculation rather than job creation that is truly at fault for low living standards there and right across the continent.

But people can see immigrants and refugees every day in the streets where they live and the market economy is harder to point at and blame. All this at a time where public health services are being sold off to private business interests and hospitals are “‘close to collapse’ in Rome, Turin and Naples.”
In the upcoming 2019 European elections there is a new and exciting alternative for voters who have seen the EU parliament as irrelevant to our lives. Understandably, most voters find it difficult to even name a single one of their representatives in Brussels but until now there has been little reason to care.

The arrival of academic and author Yanis Varoufakis’ Diem25 (Democracy in Europe Movement) has given those with a progressive outlook something credible to believe in. Varoufakis has a very personal reason to want to democratise Europe.

The International Monetary Fund and German-backed troika refused to negotiate with him in 2015 when he was the new Greek Finance Minister. Keeping his integrity intact, he resigned from the government and went on to be a cofounder of DiEM25 only one year ago.
In a remarkably short time, under the main slogan of “Transparency for Europe” this ‘pan-European’ activist movement has come up with a persuasive and comprehensive manifesto.

Their basic argument is that unless Europe and its institutions become genuinely democratic then it is doomed to disintegrate.

Partly inspired by the clear historical success of Franklin Roosevelt's New Deal in breaking the Great Depression of the 1930s in the USA, DiEM25 has developed its own highly detailed European New Deal to end the mainstream EU dogma that there is no alternative to more years of severe austerity and secret backroom deals.
Varoufakis and his organisation are also offering concrete proposals that include a Basic Universal Income, refugee justice and crucially, a plan to tame capital and finance. Amongst other major changes, they are in favour of “regulating banking and establishing a new public digital payments platform that ends the monopoly of banks over Europe’s payments.”
At the moment, DiEM25 is in the process of getting votes from its members to decide whether to become a political party that will stand candidates in the 2019 European election.

If the response is a ‘Yes’ then ordinary men and women across Europe will finally have something worthwhile to get behind and support.

[This article was first published in Catalonia Today magazine, December 2017.]

Posted by Brett Hetherington at 11:01 PM